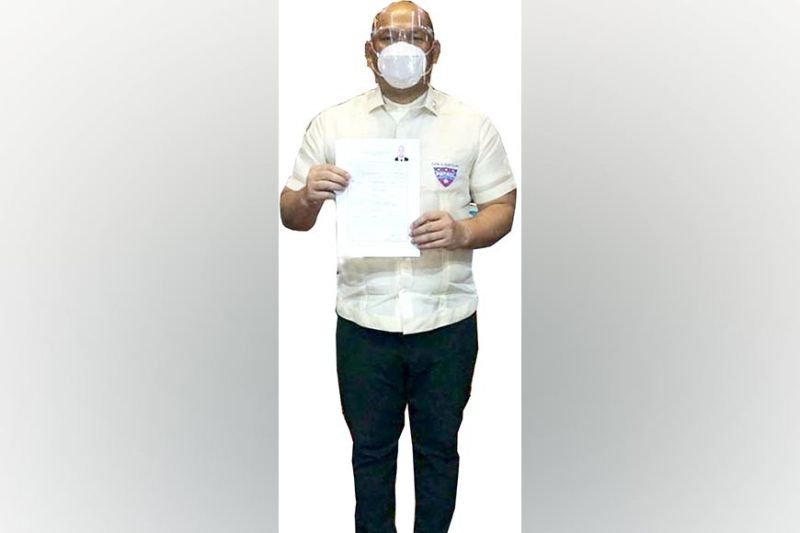 PATROL PARTYLIST NOMINATION. Representative Jorge 'Patrol' Bustos holds a copy of Certificate of Nomination and Award after he was named anew as the First Nominee of the Patrol Partylist in a national convention recently held in Angeles City. (Contributed photo)

CONGRESSMAN Jorge Bustos was selected anew as the first nominee of the Patrol Partylist for the 2022 National and Local elections, boosting efforts once again the representation of advocates of public safety and national development towards nation-building.

Bustos, who founded the sectoral organization in 2015, was recently chosen to lead the party’s nomination once again in a national convention held here where its main headquarters is also located.

He is currently the stalwart and flag bearer for the party now known for its “Ipanalo and Pamilyang Pilipino” battlecry.

In the 2019 elections, Patrol Partylist was able to secure a seat in the 18th Congress. Bustos served as the Representative for the said partylist.

Bustos is the only member of the House of Representatives who bears a police background, fortifying ascendancy and expertise of the advocacies that Patrol Partylist stands for.

Being the frontman of Patrol Partylist, he has introduced proposals and laws in support of its core ideals; public safety, crime prevention, disaster preparedness, and national development. In his first two years as a member of the legislature, he has championed the passage of several laws, with a total of almost 200 congressional bills, some of which are his original authorships, and some are co-authorships.

Aside from crafting laws in furtherance of Patrol’s advocacies, Cong. “Patrol” Bustos has been chosen as the country’s representative to the 24th Session of the Conference of the States Parties to the Chemical Weapons Convention, and the Stakeholders Session on the Chemical Weapons Convention at The Hague, the Netherlands in 2019. In 2020 and 2021, he was designated to represent the Republic of the Philippines in the Meetings of the Asean Inter-Parliamentary Association Advisory Council on Dangerous Drugs.

During the said National Convention, four other nominees were selected and presented to the officers and members of the organization. Two are retired generals from the PNP, belonging to Classes 1987 and 1988 of PNPA, and two others who are adopted members of PNPA Kaagapay Class of 1996.

“With our doctrine in place, our nominees chosen and our crucial alliances reinforced, I am confident that we will rise victoriously not only in the realm of elections but more significantly in the sustained propagation of Patrol’s advocacy that is now a full-fledged movement in every Filipino home and family. We shall become one nation committed to public safety and nation-building, ” Bustos said.

PATROL continues to envision and foster a nation where all Filipino families are able to enjoy comfortable, resilient, and secure lives and are more than committed to lay their lives, aspirations, and persevere for the Motherland.