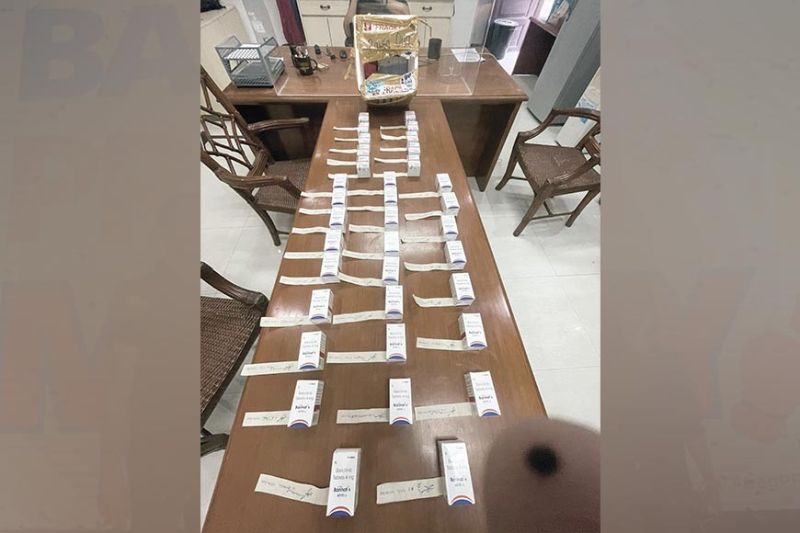 SMUGGLED BY STUDENT. A cold storage box consigned to third year medical student Raisa Ong yields 10 vials of illegally imported Tocilizumab and 25 boxes of Baricitinib tablets at the Mactan-Cebu International Airport in Lapu-Lapu City, Cebu on Sept. 14, 2021. These are drugs used in the treatment of Covid-19. / NBI FACEBOOK PAGE 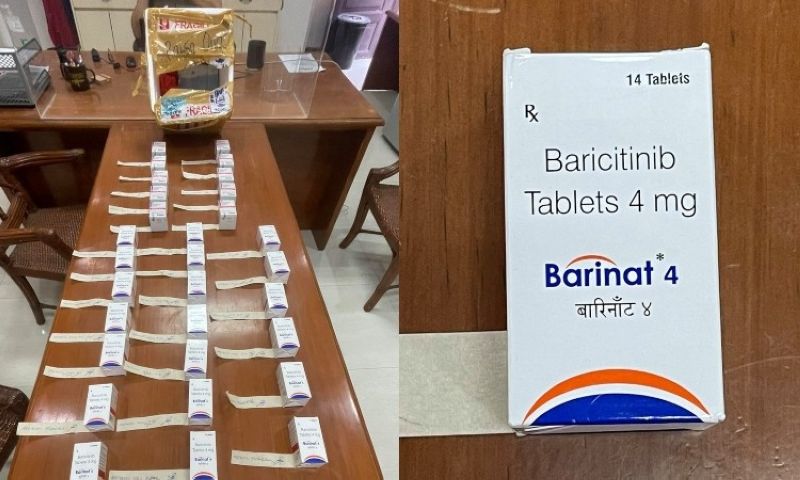 THE National Bureau of Investigation has arrested a father and daughter team in Cebu for smuggling medicines used for the treatment of coronavirus disease (Covid-19).

NBI Officer-in-Charge-Director Eric Distor said the National Bureau of Investigation-Central Visayas Regional Office (NBI-CEVRO) based in Cebu City received information that a shipment of unregistered and illegally imported Tocilizumab vials placed in a cold storage box was to arrive at 5:30 pm in Cebu via a Philippine Airlines (PAL) flight from Manila on Sept. 14, 2021.

Tocilizumab is an anti-inflammatory drug used for the treatment of severely affected Covid-19 patients.

It is in short supply in Cebu as well as in other parts of the world due to the high demand for it.

Relatives of patients in Cebu have described being forced to procure it online in the black market for more than four times its maximum retail price (MRP) set by the government if the hospital the patients are admitted to run out of supply.

The life-saving medicine is not available commercially and can only be legally obtained from hospitals that apply for the medicines with the Food and Drug Administration (FDA).

The shipment was consigned to Raisa Ong, whose name had cropped up in the intelligence report as one of the active distributors of Tocilizumab and other Covid-19 related medicines in Cebu, the NBI said.

NBI-CEVRO operatives immediately proceeded to the PAL Cargo arrival area at the Mactan-Cebu International Airport Authority Complex in Lapu-Lapu City to separate the target package until the arrival of the consignee/claimant.

When Raisa, accompanied by her father, Nelson Ong, claimed the package, the NBI-CEVRO operatives requested them to open the cold storage box.

Raisa obliged, and the box was found to hold 10 pieces of Tocilizumab vials and 25 boxes of Baricitinib tablets “all placed in carton packaging which appeared to be imported from India but with no local importer or distributor and without the FDA approved labeling and prints,” the NBI said.

The two were arrested after they failed to produce any document or license to import, distribute or sell the medicines.

The NBI said the FDA also certified that it had not granted the pair any authority or license to operate as drug importer or drug establishment of any pharmaceutical drugs.

The FDA also said the seized medicines were unregistered and illegally diverted.

On Sept. 17, the Ongs were presented for inquest proceedings before the Lapu-Lapu City Prosecutor’s Office for violation of Republic Act 3720 as amended by RA 9711, otherwise known as the Food and Drug Administration Act of 2009, in relation to RA 10863 or the Customs Modernization and Tariff Act.

Earlier this month, the NBI also arrested one person in Cebu City, Cherry Jalaron, secretary of a certain Karen Go, when she delivered a vial of overpriced Tocilizumab to a poseur-buyer in Barangay Guadalupe on Sept. 13.

Go, allegedly engaged in the illegal selling of Tocilizumab, sold the vial to the poseur-buyer online for P97,000. The MRP for the drug is just P20,581.45. Go was at large at the time of Jalaron’s arrest. (PR, CTL)