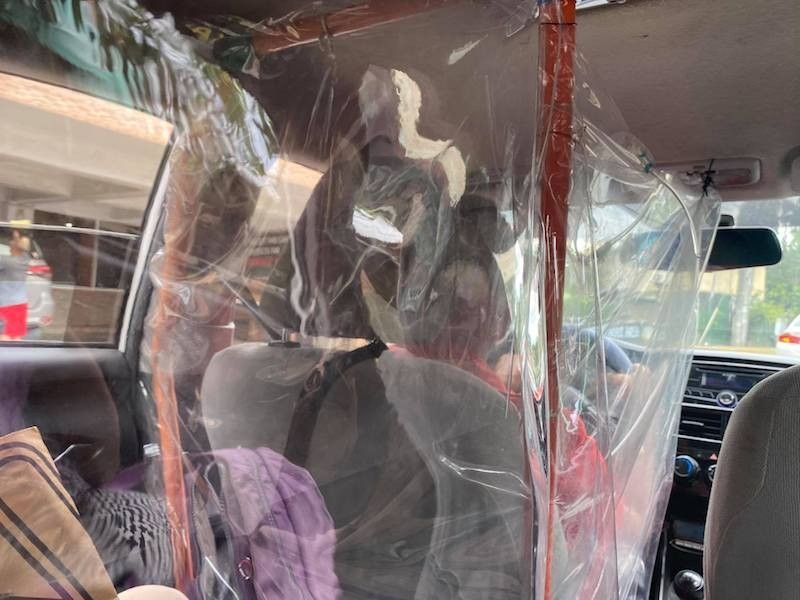 CEBU. A plastic barrier is installed inside a taxi in Cebu City in compliance with local directives against the coronavirus disease 2019 (Covid-19) pandemic. (File)

THE Department of Health (DOH) reported more than 20,000 new cases of coronavirus disease 2019 (Covid-19 on Sunday, September 26, 2021, breaking a seven-day string of below-20,000 daily case counts and raising the total caseload to nearly 2.5 million.

Based on the DOH case bulletin Sunday, there were 20,755 new infections and 24,391 new recoveries.

There were zero Covid-19 deaths for the third straight day due to technical issues in the CovidKaya epidemiological surveillance system.

The new cases, which were the highest in the last eight days, raised the cumulative Covid-19 case count in the Philippines to 2,490,858, after the removal of 72 duplicates.

The daily positivity rate continued to decline, reaching a 46-day low of 21.9 percent but still way above the 5.0 percent threshold set by the World Health Organization for an economy to safely reopen.

A total of 74,460 samples were tested for the new coronavirus on September 24. Two laboratories were unable to submit their testing output.

The DOH staff said the new cases were generated from the Covid-19 Document Repository System, which receives the testing output from diagnostic laboratories nationwide, while the recoveries were determined based on the time-based guidelines, which declares a Covid-19 patient clinically recovered after 14 days of no symptoms.

The Covid-19 deaths, on the other hand, are generated from the CovidKaya, which has been having technical issues since Friday, September 24. This is the second time this month that the DOH reported a technical problem in the CovidKaya system.

With zero deaths reported and the continued increase in the case count, the case fatality rate further declined further to 1.5 percent on Sunday. The Covid-19 death toll remained at 37,405.

The DOH said the expected increase in deaths when the CovidKaya issue is resolved would be due to backlogs.

The new recoveries, meanwhile, brought the total to 2,292,006, which comprise 92 percent of the total case count.

New infections had decelerated after reaching a new peak of 20,959 on September 6 to 12, DOH Undersecretary Maria Rosario Vergeire earlier said.

Although new cases increased at a slower pace, the daily case count remained high at an average of over 17,000 as of Sunday.

The DOH case bulletin did not state a reason for the spike on Sunday. (Marites Villamor-Ilano / SunStar Philippines)