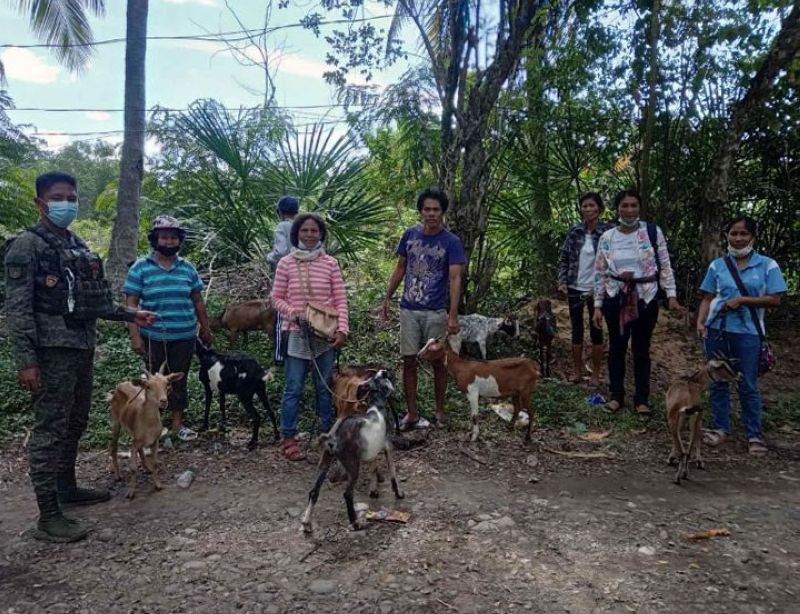 LIVESTOCK DISPERSAL. Former insurgents turned peace and development volunteers and organized farmers association by the Army’s 39th Infantry Battalion (IB) receives 65 heads of goats on Thursday, September 23, from the Department of Agriculture in Soccsksargen. A photo handout shows the recipients of the livestock dispersal program, who are from Banayal, an insurgency-cleared village in Tulunan, North Cotabato, and the goats they received to raise for livelihood. (SunStar Zamboanga)

FORMER insurgents turned peace and development volunteers and organized farmers association by the Army’s 39th Infantry Battalion (IB) benefited from the animal dispersal program of the Department of Agriculture (DA) in Soccsksargen.

The recipients of the program are members of the Peace and Development Farmers Association based in Banayal, an insurgency-cleared village in Tulunan, North Cotabato.

The association, headed by Ester France, received 65 heads of goats on Thursday, September 23. The Community Development Team of the 39IB witnessed the handover of the livestock.

“We are grateful that the government provided our organization income-generating opportunities with these goats. This will sustain our daily needs and will eventually help us to become a self-sustaining PO (People’s Organization),” France said.

Balagtey expressed his appreciation for the aggressive implementation of the Whole of Nation Approach in fighting insurgency.

“We feel that insurgency is now being fought by the whole nation. This activity which aims to support the former mass base by providing them sustainable livelihood is a way of insulating them from re-indoctrination from CPP-NPA (Communist Party of the Philippines-New People's Army) terrorists. It will negate the propaganda of the terrorist that the government is negligent in its duties and responsibilities, especially in delivering programs and services to marginalized communities,” he added. (SunStar Zamboanga)