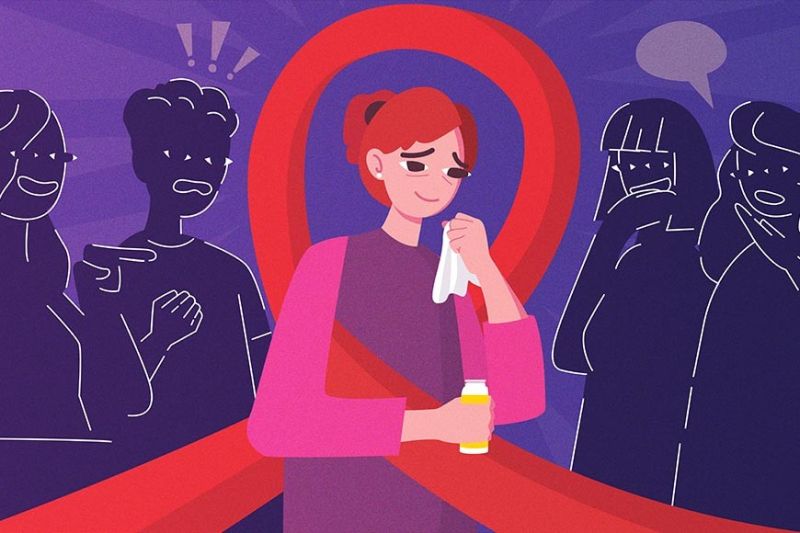 WHEN alias Joyce, 38, is not busy participating and co-organizing events for their barangay as a member of Mindanao Aids Advocates Association Inc (MAAAI), she tends to a small sari-sari store in Davao City.

Life has been simple and normal for her now after she decided to undergo consistent treatment. But years ago, life for Joyce, a transgender female, was filled with challenges and seemed to be pitch dark.

It was in September 2013 when she first felt sick only to be diagnosed with appendicitis.

“After two months, I was already coughing blood and my back hurts. I had a fever and every afternoon, I had chills. I was then diagnosed with TB (pulmonary tuberculosis) and pneumonia. My platelet count was also very low,” Joyce shared in vernacular. By this time, she was working in a KTV bar in Cebu City.

For some reason, Joyce did not seek treatment as soon as she found out about her TB. But in 2014, her condition seemed to be getting worse that her family asked her to go home already to Davao City. When she sought treatment at the Southern Philippines Medical Center (SPMC), it was not only for TB but also for human immunodeficiency virus (HIV) because, by this time, she was also diagnosed with the condition.

“I was sexually active in Cebu and we were also using illegal drugs back then so perhaps that’s where I got the virus -– from sharing of needles,” said Joyce.

For 15 days, Joyce underwent trial treatment for her TB, but this did not bear positive effects on her physical appearance, which prompted people around her to talk behind her back and lowered her self-esteem.

“My skin got really dark. I became thin. Before my treatment, I was a crossdresser, so I looked pretty and lady-like but with the medicines, my aura was different. Our neighbors were really shocked. I know they were talking behind my back, wondering why I keep on visiting the hospital. It came to a point that no one would come near me because I was sick. It became a really hard time for me back then,” Joyce said in vernacular.

For 10 months, she did not leave her house and did not want to talk to anyone. Her German boyfriend she met online visited the Philippines to see her in person.

They decided to spend time at the beach. It was there when Joyce discovered she was afraid of a starfish they saw on the shore.

It broke her heart when she heard her boyfriend tell her, “Why are you afraid of the starfish? You’re going to die anyway.”

This was only a few of the many discriminatory moments Joyce experienced as a person living with HIV and pulmonary tuberculosis. She understands that people have prejudices about HIV and TB, but having them both invites different types of discrimination and negative looks from people, even those she thought she could trust.

When Joyce was detained at the Ma-a City Jail from 2015 to 2019 after an operation in Quezon Boulevard, Davao City, the jail management assisted her in making sure she does not miss her HIV treatment. Every now and then, city jail would bring persons deprived of liberty (PDLs) who are living with HIV to SPMC for their regular stash of medicines.

But inside the facility, Joyce was also discriminated against. She was isolated in a room and for two years, did not have any companion because she has HIV. She developed anxiety and even attempted suicide. But luck was on her side as she continued to appeal for her situation. The management found out what the warden was doing to her and they investigated the situation.

Inside the jail, she studied in an Alternative Learning System (ALS), where she trained as a paramedic. She did community service until people inside slowly accepted her for who she was. Her change of heart was inspired by friends she made inside and the nurses who took care of them.

When she got her freedom back in 2019, she decided to be more active in the community and became a counselor for former drug addicts.

“I guide them, I counsel them. I give attention to those who need it. I help them re-start their lives. I’m totally clean now and haven’t used and smoked for the last eight years,” shared Joyce.

In an interview with Dr. Jordana P. Ramiterre, head of Davao City’s Reproductive Health and Wellness Center (RHWC), there were 160 people living with HIV in Davao City who were also diagnosed with TB from February 2016 to June 2021, most of them aged 18-34 years old.

During the second quarter of 2021, she said out of the 95 persons who tested positive for HIV, nine individuals were recommended for TB treatment.

When a person living with HIV is also diagnosed with TB, the treatment for TB should be done first before they undergo HIV treatment.

“If they tested positive for TB, they would undergo TB treatment for six months. We refer them to their respective district health centers. Once they have undergone TB treatment for two weeks to one month, we check if their body is ready to start with the HIV treatment. TB treatment should always come first,” said Ramiterre.

“TB is opportunistic, especially for individuals who already have a compromised immune system just like our persons living with HIV. We need to start treating TB first because it’s an active infection. When we start HIV treatment, there are three types of drugs introduced but we make sure that the body of the patient has adjusted to the medicine first before starting with the HIV medicines,” added Ramiterre.

Treatment for a person with TB is not the same for everyone. For those with Drug Susceptible TB (DSTB), treatment may last from six to 12 months. However, for those who have drug-resistant TB, treatment may last as long as nine months to 20 months. Drug Resistance is also common with HIV treatment.

This is exactly what happened to alias Jun, 33 who was first diagnosed with lymph node TB in August 2011. He did treatment for six months, but his condition did not seem to improve until a friend working for RHWC suggested he take an HIV test.

“For the first two months of the treatment, I experienced diarrhea and extreme weight loss. From 72 kilos, I was down to only 40+ kilos. I was very thin. But I improved because of the right medicines...However, when I started with my HIV treatment, it had its own side effects. I find it difficult to sleep. I was also very hyper. But eventually, my body was able to adjust. I needed to because HIV is a lifetime treatment,” Jun said.

Because of his weight, he would take four pieces of TB medicine and two pieces of HIV medicine (the other one twice a day) every single day. But as with every treatment plan, there are a few fallbacks. Jun stopped drinking his medicines in 2019 and needed to restart treatment in 2020.

“By then, I discovered I became drug-resistant. I wasn’t feeling anything. Even if I drink my medicine every day, there are no changes. That’s when my doctor told me I’ve become drug-resistant. It has no effect on me anymore so they needed to increase the dose...Because the dose increased, the side effects came back – diarrhea and being hyper,” shared Jun.

HIV/Aids Global Fund Project Regional Coordinator Patrick Albit, for his part, said they are working closely with the Davao Chest Center to lend a hand.

“We fill in the gaps for the government. Currently, we have eight case managers in Davao Region. They are the ones who assist and facilitate patients who would start treatment especially those who might need financial assistance,” said Albit.

In the Philippines, TB medicine is free in health centers or local TB clinics however, HIV treatment may be pricey for some. Currently, the Department of Health (DOH) continues to seek government support in the form of National TB Law amendment in the hopes of further increasing funding and efforts for the National TB Control Program in 2022. (JPA)

This story supports the #TBFreePH campaign of the DOH. With the help of the United States Agency for International Development, #TBFreePH aims to increase and improve conversations about TB and help address stigma and discrimination experienced by persons with TB.