42 pistols confiscated from 2 men at checkpoint 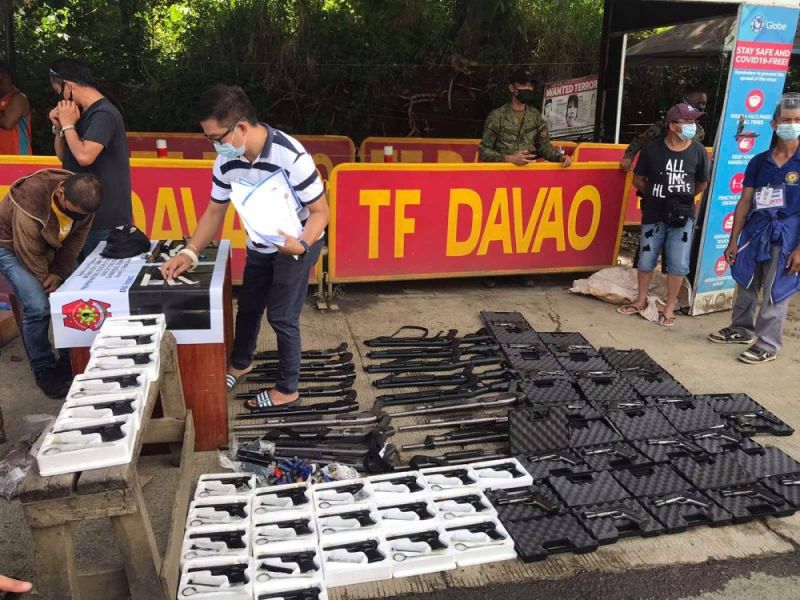 THE Davao City Police Office is set to file charges against two men coming from Northern Mindanao after they were caught bringing firearms and shabu at the Task Force Davao checkpoint in Barangay Lacson on Saturday, September 25, 2021.

In a report from the Task Force Davao, the apprehended men were identified as Michael John Lantoria, 40, from Cagayan de Oro City, and Sebastian Quiblat, 61, from Misamis Oriental.

Calinan Station Police Major Jake Goles said the two were on board a pickup traveling towards Calinan to General Santos City.

When the Task Force personnel subjected the vehicle for inspection, they were able to intercept at least 42 pieces of 9-millimeter (mm) pistols, 18 pieces of gauge shotguns and assorted ammunition.

Aside from firearms, security forces were also able to intercept five plastic sachets believed to be "shabu" weighing approximately 3 grams with estimated street value of P48,000, another 9mm pistol, a 380 pistol with one magazine and seven rounds ammunition and other drug paraphernalia.

The task force said the suspects were not able to present any travel authority/permit to transport the said firearms.

"This is a testament to the vigilance and alertness of the TFD personnel in ensuring the safety and security of Davao City. With this catch, indeed, the Culture of Security is very much alive in Davao City," Comia said.

“This big catch in Davao City is a clear manifestation of 10th Infantry Division's commitment to helping provide lasting peace and order in the region," Torres said.

The 19th Davao City Council passed a resolution recommending the continuous "gun ban" in the city until December 31, 2021.

The council approved on Tuesday, April 20, the resolution recommending the suspension of permit to carry firearms outside of residence in the territorial jurisdiction of the city until the end of the year.

Meanwhile, security forces in the city are intensifying its security vigilance, of which its threat level is at "Alert Level 3,” in response to possible terror attacks in six Southeast Asian nations, including the Philippines.

Earlier, the City Government also warned Dabawenyos of a possible terror attack in the city. (With reports from Jeepy P. Compio)