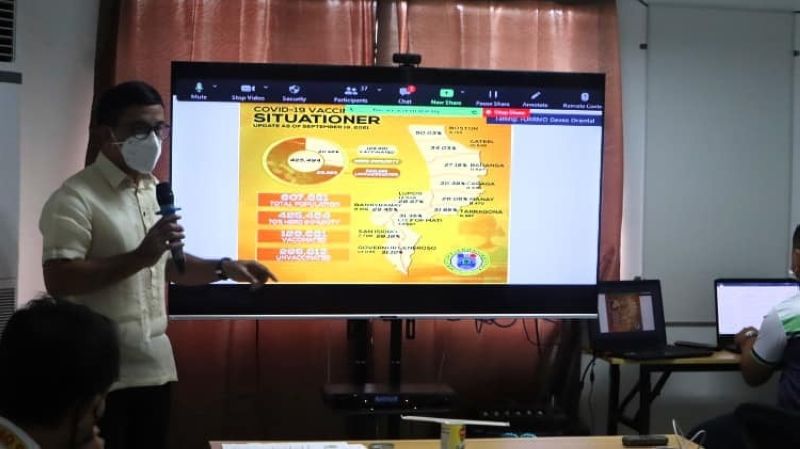 THE Provincial Government of Davao Oriental has posted a significant decrease in active Covid-19 cases, making the province have the lowest number of recorded active cases in the entire Davao Region.

Based on the Department of Health-Davao Region (DOH-Davao) on Saturday, September 25, Davao Oriental has a total of 623 active cases. At present, the province is the lowest among six provinces in terms of recorded active cases.

(We saw a decrease in positive coronavirus cases in Davao Oriental. From being number three in the entire region, we dropped to number six position, the lowest in the entire Davao Region.)

In a press statement, the provincial government attributed the improvements to the continuous implementation of stricter measures to curb the spread of the virus.

On September 20, the province had a total of 820 active cases, 145 of whom were admitted to the Covid Hospital while the remaining 675 were confined at isolation facilities.

"It is attributing the significant reduction in the number of active Covid cases to 'stricter guidelines and heightened restrictions' being implemented throughout the province," the province said.

Since the province was placed under general community quarantine (GCQ) with heightened restrictions from September 8 to 30, the province noted a 40-percent decrease of its active Covid-19 cases.

Among the local government units (LGUs) in the province, the City of Mati has posted a 50-percent decrease of its active Covid cases, from 600 to 337. The number of active Covid cases in the municipalities of Davao Oriental are as follows: Governor Generoso, 93 cases; Caraga, 65; Banaybanay, 63; 61 in San Isidro; Baganga, 58; Lupon, 44; 40 in Tarragona; 25 in Manay; 20 in Boston; and 14 in Cateel.

Despite the national The Inter-Agency Task Force for the Management of Emerging Infectious Diseases (IATF) did not approve the province’s request to elevate the entire province’s quarantine status to enhanced community quarantine (ECQ), Dayanghirang said the province strengthened the implementation of the existing restrictions on the ground.

During a quarterly meeting of the Provincial Disaster Risk Reduction and Management Council, the governor credited the collaboration among local government officials and frontliners in the pandemic response.

"I hope this will be sustained in the coming days so we would be able to come out alive of this pandemic that continues to wreak havoc in our lives," Dayanghirang said.

During the meeting, Provincial Task Force on Covid-19 Action Officer Dr. Reden Bersaldo presented figures on the number of new Covid variants in the province. He said the province has 24 Delta cases, 15 Beta cases, and 10 Alpha cases.

Bersaldo said the public must continue the observance of minimum health protocols.

He added that Covid-19 patients must be isolated immediately to contain the fast transmission of the said variants.

As of September 19, the total number of vaccinated individuals in the province has already gone up to 129,681 individuals, which is 30.48 percent of the herd immunity target for the province.