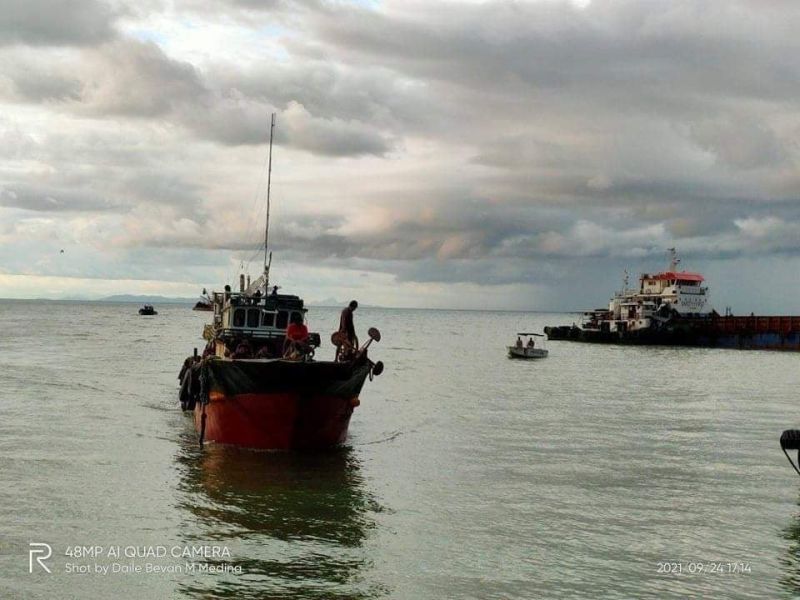 NEGROS. The ongoing search and rescue operation of the five missing crew of a fishing boat from Cadiz City that capsized Friday, September 24. (Contributed photo)

FOUR died, while five others are still missing after a fishing boat from Cadiz City sank off the coast of Iloilo province on Friday, September 24, 2021.

Authorities identified two of the four fatalities as Norberto Parlotzo, a resident of Bantayan Island, Cebu; and Rommel Engle, a resident of Cadiz City in Negros Occidental.

The two others, whose bodies were recovered Sunday, September 26, have yet to be identified.

Philippine Coast Guard (PCG)-Western Visayas District deputy commander Captain Ludovico Librilla, who is also the Coast Guard Station-Negros Occidental commander, said based on initial investigation and accounts from survivors, the F/V St. Peter the Fisherman II owned by Tristar Fishing Corp. was fishing off between the waters of Gigantes Island, Iloilo and Tanguingui Island, Cebu when they encountered strong winds and big waves.

The vessel tilted to its left side and then capsized.

The 22 other crewmen managed to get out of the fishing boat and were later rescued by other fishing vessels near the area.

The surviving crew members were brought back to Cadiz City.

The PCG also deployed its air assets to help in the search.

On Saturday evening, a team of divers hired by one of the families of the missing crew recovered Parlotzo and Engle's remains.

As of Sunday, a team of divers of the PCG's Special Operations Unit led by Coast Guard Western Visayas Division Chief of Staff Commander Jansen Benjamin arrived to search the sea vessel’s wreck.

The wreck lies around 24 fathoms or 44 meters deep based on sea charts of the area.

An investigation team from the PCG's Central Office is also heading to Negros Occidental to interview the survivors, and conduct a further probe as to how the vessel sank.