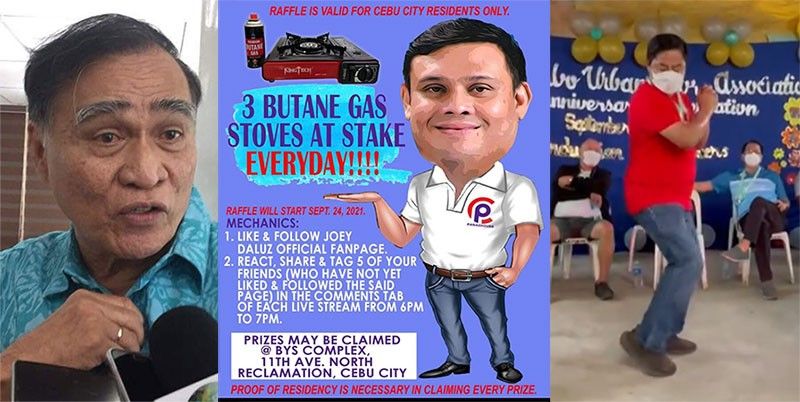 FRANCISCO "Bimbo" Fernandez, executive assistant to then mayor Tomas Osmeña, is reportedly being "urged and persuaded" by "urban poor groups and youth, farmers, NGOs and party-list associations" to run for city mayor.

But BOPK chief Tomas reportedly is supporting Rodrigo "Bebot" Abellanosa for mayor. Wouldn't Bimbo's candidacy, if he'd run, take away some of the votes from that sector for Bebot?

Bimbo though is known for independent thinking. On April 2, 2019, Bimbo resigned as Tomas' executive assistant to campaign for Otso Deretso candidates.

Mabatid: 'I am only a councilor'

One Edward Jules Chu Aunzo of Cebu City has brought Cebu once again to national stage.

Last July, a complaint for non-payment of the balance of the cost of a party food package was raised by Maria Amy Hofilena against Marjorie Alison, both of Cebu City. The forum: the Manila-based Raffy Tulfo radio program.

This time, Aunzo lamented to broadcaster Ben Tulfo that Cebu City Councilor Niña Mabatid had not paid the debt for his services as videographer to City Hall.

It was not clear who contracted the three-year-old debt. Mabatid reportedly said it was not hers. But Aunzo said the councilor first explained that it was taking City Hall a long time to process the payment, then later said it was still being processed at Pinoy Care, Mabatid's company.

Whose debt was it? That must be ascertained. Even if it was City Hall's, though, the councilor personally contracted Aunzo, she must take more effort to have it paid. Three years, or two years, is a long time.

In her denial about the debt and saying she has "no access to government funds," Mabatid said, "I am only a councilor." She said the same thing why she could not do much to help pandemic victims, "I am only a councilor." That must be one reason she already wants, even as a Sanggunian rookie, to leave the City Council and run for Congress. She might then also plead, for any lapse or failure, I am only a congresswoman.

Mayors of local governments where the Sanggunian is controlled by the opposition are hamstrung on food aid, medical supplies and personnel support for vaccination, contact tracing, isolation and other anti-Covid requirements.

The few exceptions are LGUs whose opposition parties are reasonable enough to allow public interest prevail over partisan ends.

Basing on the administration party's lament in Lapu-Lapu City, including the alleged Sanggunian inaction on its supplemental budget #3, that LGU is not among the exceptions.

Unlike in Cebu City, Mandaue City and Talisay City -- where the executive department also controls the legislature -- in Lapu-Lapu, 10 of 12 councilors and the city's vice mayor belong to the Radazas' Team Deretso. Only two of Mayor Junard "Ahong" Chan's Team Libre. Ten of 12 -- plus the VM's vote in case of a tie, which doesn't happen -- is surely a lopsided equation in favor of the Radazas. The Radazas' candidate for mayor, Arturo "Boy" Radaza, lost in 2019 to Mayor Chan but Team Libre's bet for the sole House seat, former mayor Paz, won and the VM, presiding officer, and 10 councilors also won.

Apparently, the Radazas and their subalterns in the Sanggunian think that tying Mayor Ahong's hands during the pandemic would their return to power in 2022.

What Chan's camp has been doing is to blame repeatedly the politics of its rival. The clear suggestion is that the Sanggunian 10 that is being dictated by the congresswoman and the former mayor.

Councilor Jerry Guardo has been conducting a "TikTok Dance Challenge," with prizes, in the south district's barangays.

And Mayor Chan is doing the TikTok with two schoolkids, per the video that's circulating. If Ahong could dig a ditch, lift heavy load, and rest on the pavement -- with all the poses faithfully photographed -- dancing would be a breeze.

How effective are those "awareness or recognition" gimmicks?

Recall that in the 2019 elections, then-BOPK Guardo placed ninth in the city north elections but moved to #7 when Alvin Arcilla, with his BOPK teammate Sisenio Andales, was disqualified for violation of the term limit. Barug's Joel Garganera joined the winning column as #8.

With his TikTok contest gimmick, Guardo must hope to land in the upper half of the winners list next time.