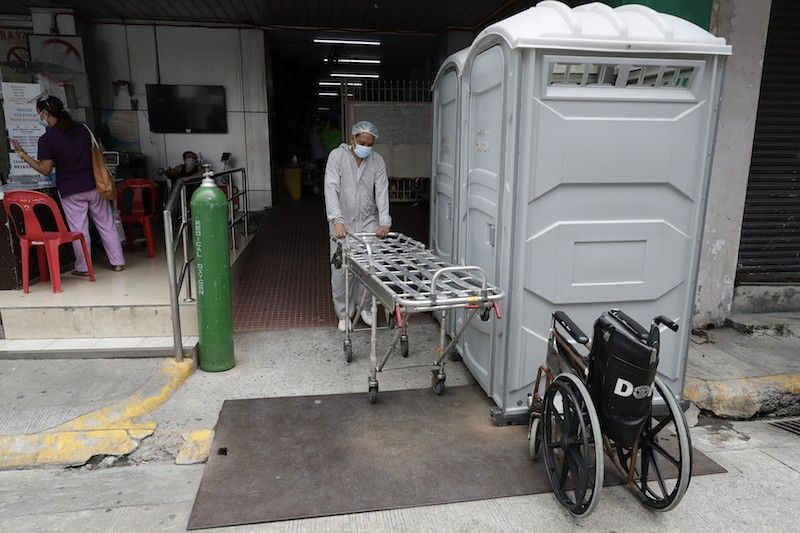 MANILA. In this photo taken in April 2021, a health worker wearing a protective suit pushes out a bed after the person who occupied it died due to Covid-19 complications at a hospital in Manila. (File)

THE Department of Health (DOH) on Tuesday, September 28, 2021, reported 102 additional deaths for the September 27 case bulletin as manual encoding of data in the CovidKaya surveillance system continued.

In its Monday case bulletin, the DOH reported 93 deaths, but also noted that 117 cases that were previously tagged as recoveries were reclassified as deaths.

No deaths were reported in the previous three days from September 24 to 26 because the CovidKaya server was down.

She said the CovidKaya server went down on September 23 because it had reached 100 percent storage capacity.

As a result, data pushed from the Covid-19 Document Repository System (CDRS) was rejected and the CovidKaya user interface became inaccessible.

“This was mainly due to the limited server capacity of CovidKaya to handle, receive and process bulk data pushed from the CDRS,” De Guzman said.

The CDRS receives the testing data submitted by diagnostic laboratories nationwide and pushes this data to the CovidKaya.

The DOH technical team then extracts the data from the CovidKaya and validates this for inclusion in the case bulletin.

While the CovidKaya server was down, De Guzman said the technical team directly extracted the data from the CDRS to generate topline numbers and case line lists for inclusion in the case bulletins from September 24 to 26.

The CDRS data, however, does not include information on deaths, hence, the zero deaths in the previous three days. Backlog deaths will be reported in separate advisories, the DOH said.