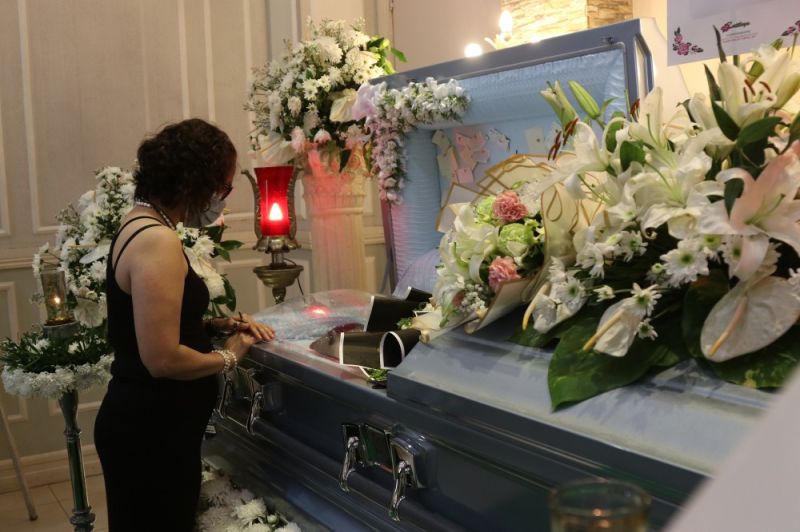 JUSTICE. Artist Bree Jonson’s mother continues to cry for justice for her daughter’s death. It can be recalled that Bree was found dead in a hotel room in San Juan, La Union. This photo was taken yesterday, September 28, inside Cosmopolitan Memorial Chapel, Davao City before she would be laid to her final rest today, September 29. (Mark Perandos)

THE mother of Davao artist Bree Jonson has asked the help of President Rodrigo Duterte for the arrest of Julian Ongpin.

Bree's mother, Sally Jonson, told SunStar Davao in a phone interview that she is not convinced that her daughter's boyfriend, Ongpin, has no involvement in the death of her daughter.

Bree was found dead inside a hotel room of a beach resort in La Union on September 18. Police reports showed that Ongpin was the last person she was in company with before her death.

Based on the initial report of her autopsy examination, Jonson died of asphyxia.

The family, however, said Bree, whose real name is Breanna Patricia Jonson Agunod, sustained several bruises and wounds, which may indicate that there was a struggle.

Mayor Sara Duterte-Carpio, in a radio interview on Monday, September 27, extended her deepest condolences to the Jonson family.

"On behalf of the City Government of Davao, we'd like to extend our deepest condolences to the family members. The loss of a loved one, ang dili na siya ma-replace (It cannot be replaced.). We are with you in your grief during this time," Duterte-Carpio said in an interview on 87.5 FM Davao City Disaster Radio.

Duterte-Carpio also said that the city is ready to offer assistance to the family.

She added that any resident of the city can avail themselves of the funeral assistance from the Lingap Para sa Mahirap.

She added that they will provide assistance through requisition.

When asked for her reaction to the mayor’s message, she said, “Maybe Mayor Sara can push her dad, the President, on the case of Julian because that is a drug case. And that is the fight of the country. Hindi namin kailangan ng help sa burial (We no longer need burial assistance), and all. Pero (But) support on the fight, yes. We need the support. We need them to back us up, especially doon sa case ni (on the case of) Julian.”

Sally also said that having Ongpin sentenced in violation of illegal drugs is already justice served on their part.

Police authorities arrested Ongpin after possessing 12.6 grams of cocaine. He also tested positive for cocaine use. But he was released following the order of the prosecutor who said "the case is not proper for inquest proceedings. The apprehension of the respondent does not fall under any instances where warrantless arrest is allowed."

Ongpin is the son of former Trade minister Roberto Ongpin.

The Ongpins are one of the most influential families in the country.

Police said it was Ongpin who found Bree hanging inside the bathroom.

But her mother had doubts on their report, resulting in them seeking the help of the National Bureau of Investigation (NBI).

Sally said there was already foul play in the incident.

She admitted that the murder case is hard to prove. But she said Ongpin must be arrested for possession of cocaine and had tested positive during the drug test.

Sally also expressed disappointment with the ongoing investigation, and how the Philippine National Police is handling it.

"Kaya kami nafu-frustrate with PNP, kami, wala kaming pera (We are frustrated with PNP, we do not have enough money), but we manage to get our legal team. Siya hindi mo nakikita, wala kang naririnig, wala akong narinig na pangalan ng kanyang legal, ni isa, wala akong napangalanan (While on the part of the Ongpins, we do not hear anything from them. We do not even know their legal team. Neither a single name, we are not aware),” she said.

The wake was open to the public only for three days, in accordance with the guidelines of the Davao City government.

Bree will be laid to rest on Wednesday afternoon, September 29, at Davao Memorial Park.

She said Bree was supposed to stage her exhibit this December, which is why she was in La Union during the time.

Presidential Spokesperson Harry Roque said in a virtual press conference on September 27, said the President is already aware of the family's appeal.

According to a report from PTV, the drug case of Ongpin is now being handled by the Department of Justice for preliminary investigation.

NBI, meanwhile, is handling the parallel investigation of Bree's case, including the autopsy.