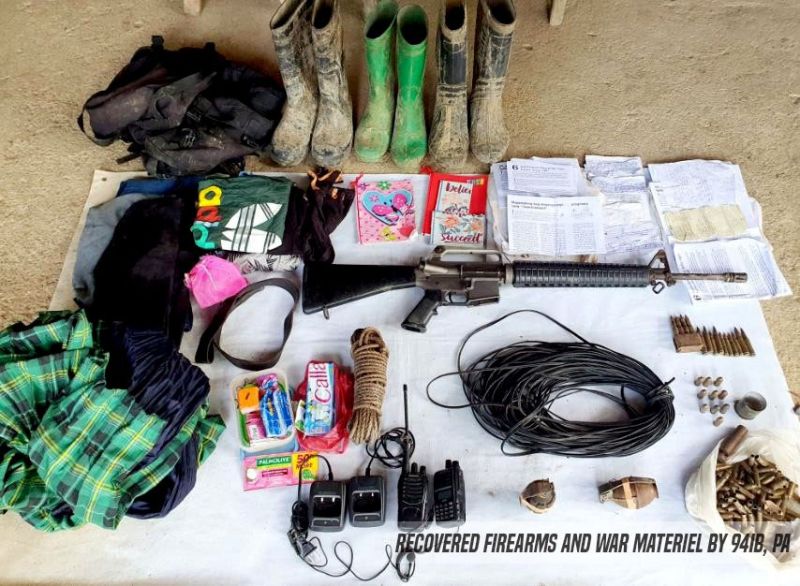 NEGROS. Firearms recovered by the Philippine Army following their classes against the New People’s Army in the hinterlands of Himamaylan City Friday, October 1. (Contributed photo)

Peña said the army trooped to the area after receiving complaints from the residents that they were being extorted and harassed by the rebels.

During the initial gun battle, the insurgents detonated what was believed to be landmines in their attempt to fight off with the government forces.

However, no one was hurt in the explosion and the troops later managed to outmaneuver the insurgents forcing them to retreat.

The encounter only lasted for about five minutes, the army said.

About five hours later, another gun battle between the rebels and the government took place in the nearby Sitio Lanap in Barangay Buenavista.

The operatives of the 94IB's blocking force encountered the retreating NPA insurgents.

The exchange of fires between the army and about 15 believed to be NPA members lasted for almost five minutes.

The insurgents retreated towards the southwest direction of the barangay, a report from the Philippine Army further showed.

During the twin clash, government forces seized a loaded M16 assault rifle and an M14 rifle.

Government forces also seized one of the insurgent's backpacks which contained several personal belongings and subversive documents noted by the army to have "high-intelligence value."

No one was hurt among the government forces during the twin clash, but it is unknown if the NPA suffered casualties in the fight.

"They are showing their true nature as an anti-peace and anti-people terrorist organization with no regard to humanity," he said.

Arevalo reiterated his call for all Negrenses to continue participating in the government’s journey towards ending the local communist armed conflict in Negros Island.

That in Himamaylan City is latest encounter in the province, so far, following the deadly clashes in the towns of Manapla and Ilog which resulted in the death of at least eight alleged NPA rebels.