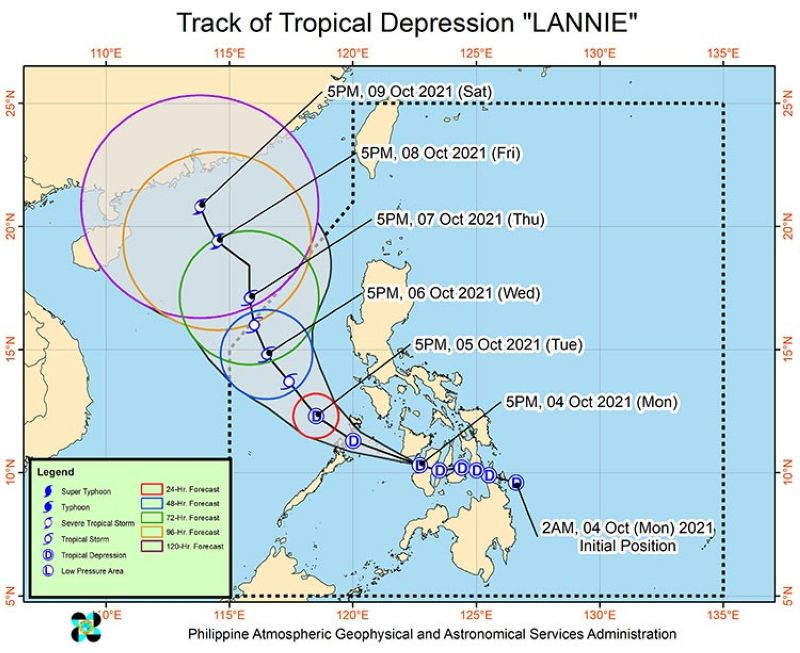 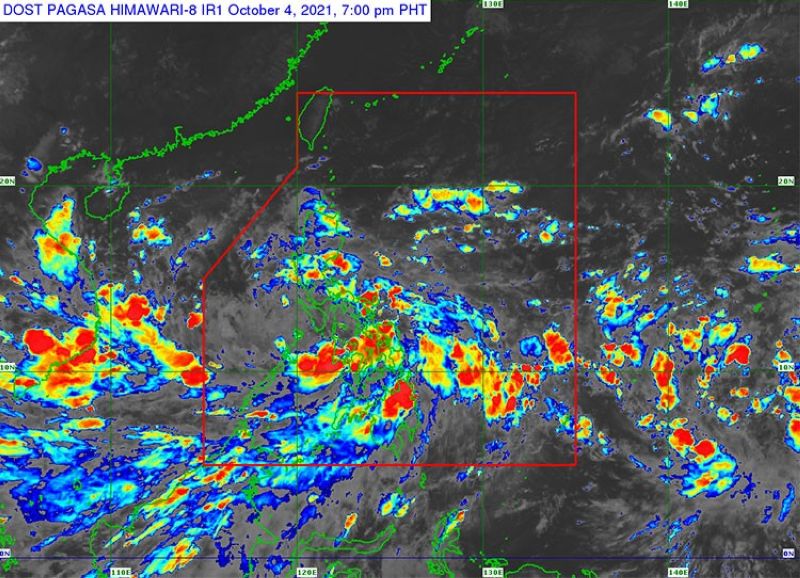 TROPICAL Depression “Lannie” was forecast to make landfall over the southern portion of Panay Island Monday night, October 4, before emerging over the Sulu Sea and across the Cuyo archipelago.

The Philippine Atmospheric, Geophysical and Astronomical Services Administration (Pagasa) said that as of 7 p.m. Monday, the center of Lannie was located over the coastal waters of San Joaquin, Iloilo.

The tropical cyclone was packing maximum winds of 45 kilometers per hour (km/h) near the center, gusts of up to 55 km/h, and central pressure of 1002 hPa. It was moving westward, heading toward the southern portion of Panay Island at 25 km/h.

Pagasa said strong winds or higher may extend outwards up to 200 kilometers from the center of Lannie.

It said after making landfall over Panay Island, the tropical depression may make another landfall in the vicinity of northern Palawan or Calamian Islands Tuesday morning, October 5.

“It will then emerge over the West Philippine Sea a couple of hours later. Throughout this entire period, Lannie is forecast to remain within tropical depression category, with a possibility of slight intensification once over the Sulu Sea or West Philippine Sea,” Pagasa said in its 8 p.m. Monday bulletin.

So far, the tropical depression has made eight landfalls:

Pagasa said Lannie will continue to bring moderate to heavy rains over Western Visayas and Mimaropa Monday night until Tuesday morning, October 5, while light to moderate with at times heavy rains are possible over Calabarzon, Bicol Region, Mindanao, and the rest of Visayas.

It warned the public against scattered flooding (including flash floods) and rain-induced landslides especially in areas that are highly or very highly susceptible to these hazards.

Strong winds (i.e., strong breeze to near gale conditions) with occasional gusts will also be experienced within any of the areas under TCWS 1 during the passage of the tropical depression, said Pagasa.

The enhanced easterly flow north of the tropical depression may also bring occasionally gusts reaching strong breeze to near gale in strength over Extreme Northern Luzon and the coastal and upland/mountainous areas of the eastern section of Luzon in the next 24 hours, it added. (LMY)