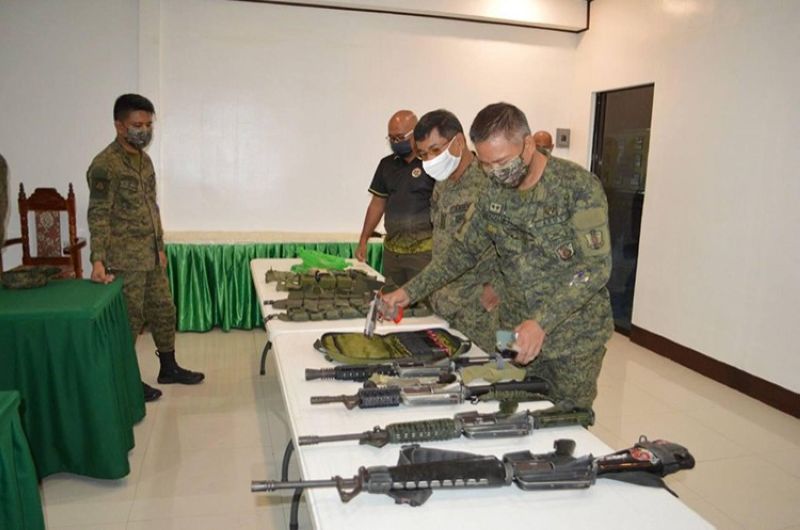 SEIZED FIREARMS. Troops seize five firearms while providing security to the office of the Commission on Elections (Comelec) on October 5 in Pikit, North Cotabato. A photo handout shows military officials inspect the confiscated firearms at the advance command post of the 90th Infantry Battalion in Ladtingan village, Pikit. (SunStar Zamboanga)

Rosario said the firearms were seized after troops noticed two firearms displayed in plain view at the back of a Toyota pick-up bearing plate number DAD-9596 that was approaching the municipal hall.

"The firearms were later covered partially with a blanket with the barrels still visible," Rosario said.

He said the troops immediately flagged down the vehicle and seized the two visible firearms in violation of the Comelec gun ban in connection with the filing of the Certificate of Candidacy from October 1 to 8.

He said three more firearms were recovered at the front passenger's seat when the troops inspected the vehicle.

Seized were four M16 A1 rifles, 27 long magazines, one short magazine, 850 rounds of 5.56 ammunition, three bandoleers, and one caliber .45 pistol with six magazines and 45 rounds of ammunition.

The confiscated firearms and ammunition were brought to 90IB advance command post (ACP) in Ladtingan village, Pikit, for documentation and safekeeping.

Uy said Mantol and his three companions were interrogated and were subsequently released by the police chief of Pikit Municipal Police Station in coordination with the operating troops.

"We will continue to assist the police in enforcing security during the period of the national and local elections to ensure that no election-related crimes will be perpetrated," Rosario said. (SunStar Zamboanga)