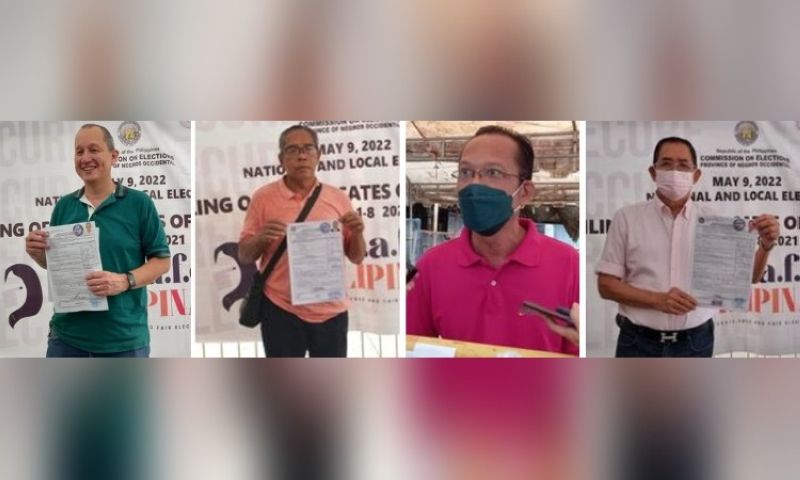 THREE more aspirants for congressman of the Lone District of Bacolod have filed their certificates of candidacy (COCs) at the Commission on Elections (Comelec) in the city Friday, October 8, 2021.

Atayde, an independent candidate, said he decided to run to help the city,, especially during this time of the pandemic.

Atayde, who is also a former consultant of the Bacolod Real Estate Development Corp. (Bredco), wants to focus on the creation of economic zones to provide more jobs for the Bacolodnons especially the poor.

David, also an independent candidate, said it is his third time to run in the local seat.

He said he is a new hope for a much better Bacolod and he wants to focus on law enforcement, cleanliness and housing programs among others.

For San Miguel, of Pederalismo ng Dugong Dakilang Samahan Party, he filed his COC because he wants to implement change for Bacolod City.

Aside from Atayde, David and Narciso, Rommy Gustillo, of Barangay Mansilingan, also earlier filed his COC for congressman of the Lone District of Bacolod.

Tan, of Aksyon Demokratiko party of presidential bet and Manila Mayor Isko Moreno, said a big political group in Bacolod City also invited him to join them, yet he decided to file independently.

Tan recalled that in previous elections, he also ran as an independent candidate.

Tan said his decision to return to politics is not easy because his family is actually against it.

“They want me to enjoy my life, but I explained to them that my decision is beyond politics (and) this is not about myself, (rather) this is for the people of Bacolod,” he said.

He added that ever since, he has wanted to serve the people of Bacolod and serving the Bacodlonons is his passion.

Bacolod Election Officer Kathrina Trinio-Caña said the filing of COC from October 1 to 8 was generally peaceful with no untoward incidents.

She said they only noted minimal defects on the COCs of some of the candidates.

As of 4 p.m. Friday, Comelec recorded a total of 39 aspiring candidates for councilor, two for mayor, three for vice mayor and five for congressman.

Trinio-Caña said they will check the list of the candidates today, October 9, and submit it to the province.