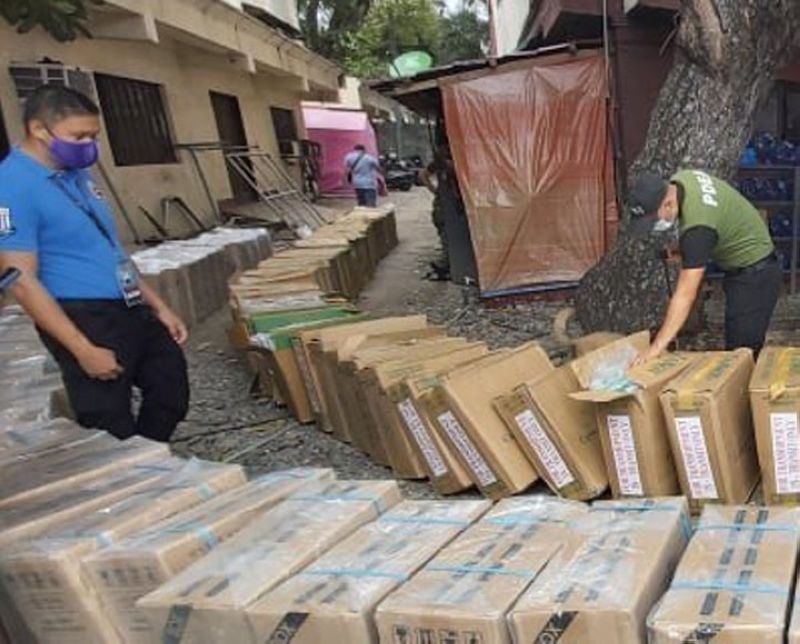 SMUGGLED CIGARETTES SEIZED. Government operatives seized a shipment of some P4.7 million worth of smuggled cigarettes and arrested eight people on Friday, October 8, near Manalipa, an island village east of Zamboanga City. A photo handout shows a K9 of the Philippine Drug Enforcement Agency and a Bureau of Customs personnel inspecting the seized cargo for possible presence of illegal drugs. (SunStar Zamboanga)

GOVERNMENT operatives have seized a shipment of some P4.7 million worth of smuggled cigarettes and arrested eight people on Friday, October 8, 2021, near an island village east of Zamboanga City.

Reyes said the joint operatives of the 2nd City Mobile Force Company and Bureau of Customs (BOC) were on seaborne patrol when they spotted two motorboats loaded with 137 master cases of assorted smuggled cigarettes worth P4.7 million.

Reyes said one of the two motorboats named “Az-Zhahir” was manned by a five-man crew who were identified as follows: Sublaiman Kahal Hali, 22; Nurhusin Nadduha Habi, 28; Abdilsa Allus Ottok, 22; Nasri Habi Kayeh, 27; and Saniboy Kahal Habi, 17, all are residents of Lantawan, Basilan province.

The ZCPO director said the confiscated cigarettes, motorboats and crewmen were turned over to the custody of the BOC for the filing of appropriate charges.

He said the arresting team together with the operatives from the Philippine Drug Enforcement Agency conducted visual inspection and paneling on the confiscated items for the possible presence of illegal drugs. (SunStar Zamboanga)