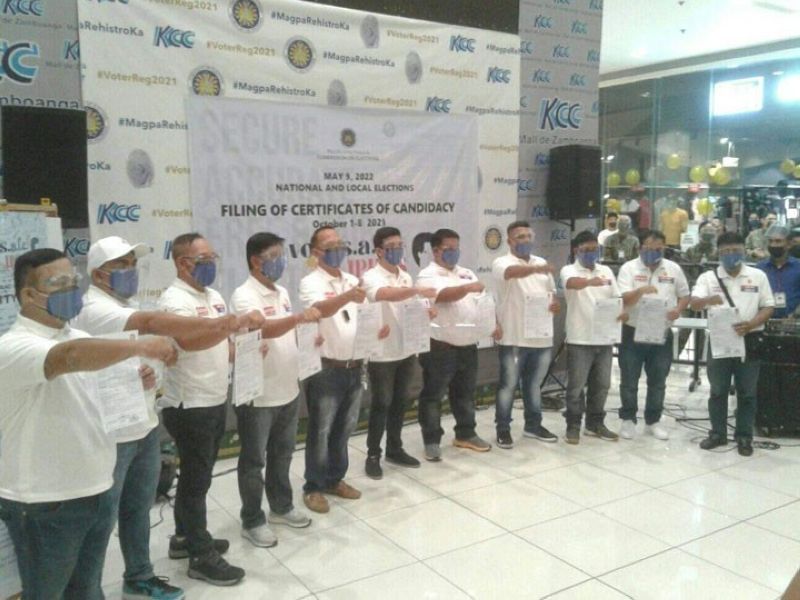 TEAM DALIPE. The 'Team Dalipe' file their certificate of candidacy (COC) Friday, October 8, before the Commission on Elections (Comelec) in Zamboanga City for the 2022 polls. A photo handout shows Councilor John Daklipe (6th from left), his running mate, lawyer Melchor Sadain (5th from left), and some of their candidates for city councilors in a photo session after they filed their respective COCs. (SunStar Zamboanga)

CONGRESSMAN Manuel Jose Dalipe filed his certificate of candidacy (COC) before the Commission on Elections (Comelec) in Zamboanga City for the 2022 polls, seeking his third and final term as representative of the second congressional district of this city.

Dalipe motored Friday afternoon, October 8, to the Comelec office here to file his COC together with his younger brother, first-term City Councilor John Dalipe, who filed his COC for mayor, and other party members.

The two brothers filed their respective COCs under the banner of Lakas-Christian and Muslim Democrats (Lakas-CMD). They named their group “Team Dalipe.”

They were accompanied by their father, former mayor Manuel Dalipe, aside from their party members when they filed their candidacy.

“We in the Team Dalipe is ready to serve the city,” Congressman Dalipe said.

Despite being the youngest among mayoralty candidates, Councilor Dalipe said with his 19 years of experience in public service, he is ready to serve as the mayor of this city if elected.

Councilor Dalipe, 37, a nurse by profession, has first served as a councilor representing the Sangguniang Kabataan (SK) in the city council, barangay chairperson, and later a councilor in the second district.

“I am ready physically, emotionally, and mentally to serve as the city mayor if given the mandate,” Councilor Dalipe said.

Team Dalipe’s candidate for vice mayor is lawyer Melchor Sadain, a former city councilor and their candidate for congressman in the first district is Lawyer Wendell Sotto.

The team has fielded a complete lineup for the eight-seat city council slate in each of the two congressional districts of Zamboanga City. (SunStar Zamboanga)