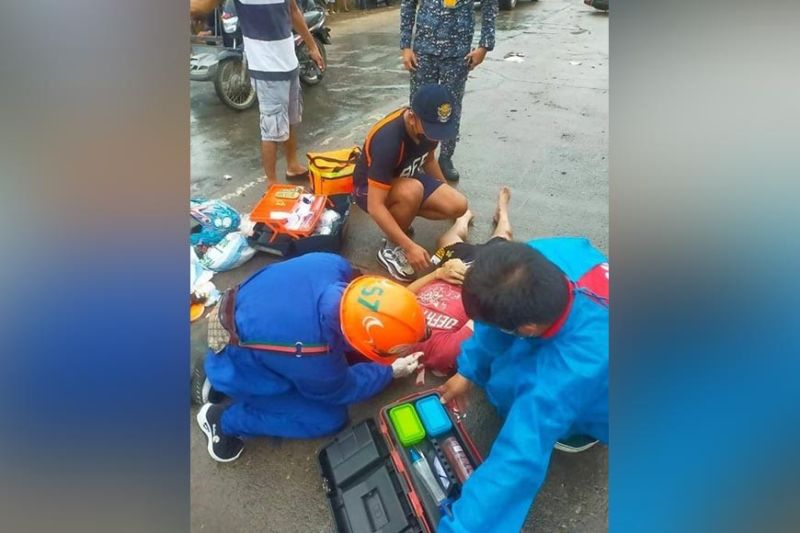 NEGROS. One of the victims being given first aid by the Binalbagan rescue team. (Binalbagan DRRMO photo)

A TEACHER and a tricycle driver were killed in a freak accident past 10 a.m. Friday, October 8, 2021, in Binalbagan town, Negros Occidental, police records showed.

Witnesses told the police that the motorcycle driven by Ramos was speeding and he failed to notice the hump in the middle of the road, causing him to lost control over his motorcycle.

Ando, who is a teacher of the Isabela National High School, and Ramos were brought to the Binalbagan infirmary clinic but died while being treated for their fatal injuries.

It was not stated on the report if they were wearing helmets.

Rebusquillo said he will coordinate with the Department of Public Works and High Ways for the removal of the hump.

Meanwhile, a stevedore was injured after he was shot by two unidentified motorcycle-riding assailants near the Bredco Port in Barangay 6, Bacolod City Saturday, October 9.

Police Captain Paul Vincent Pendon, chief of Police Station 2, said Joel Go, 31, of the said barangay, was walking along the exit of Gate 3 of Bredco Port with his male companion, whose name was not disclosed, around 5:30 a.m. when the gunman fired at him several times and fled.

He sustained wounds on his right leg and back and was brought the victim to the Riverside Medical Center Inc. while his companion was unhurt. (With reports from MAP)