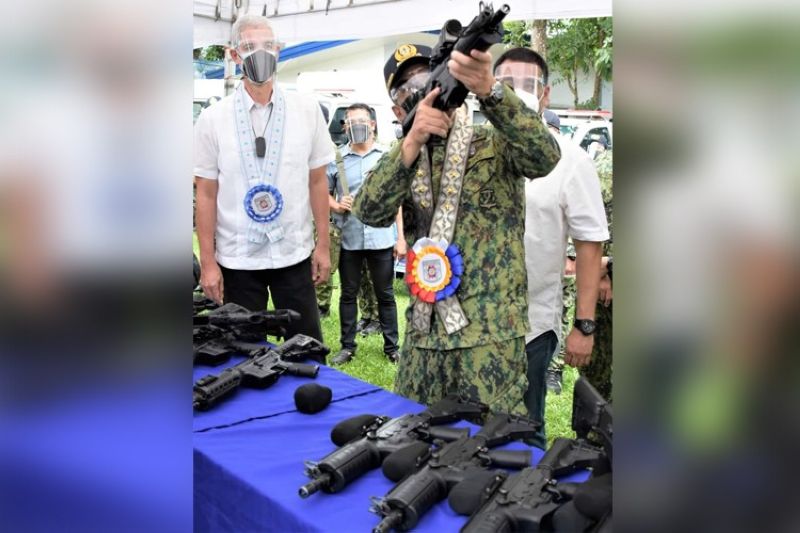 PNP Chief General Guillermo Eleazar on the sidelines of his command visits at the Negros Occidental Police Provincial Office (Nocppo) in Bacolod City over the weekend. (Capitol Photo)

"Always do good in your duties."

Eleazar, on the side lights of his command visits at the Bacolod City Police Office (BCPO) and Negros Occidental Police Provincial Office (Nocppo), noted that he only has six months to place all the police stations and get rid of the erring cops.

He also explained the importance of getting rid of the "padrino system," or gaining appointment by affiliation, and replacing it with the "nameless and faceless" system of recruitment for new police officers.

Eleazar stressed that the "padrino system" robs the PNP of successfully getting personnel who are far more capable, performing and deserving.

"All of the programs, all of the doctrines, and all of the policies to our roadmap are in place, what we lack though is strict implementation and effective supervision," the PNP top official said.

Aside from always doing good in their work, Eleazar advised the policemen to make immediate corrective action even at the smallest of issues to prevent it from getting worse.

"If the problem becomes bigger, it would create a negative response and outlook from the public," he said.

Referring to the police stations as "window to the soul of the PNP," Eleazar emphasized that these entities should look presentable and orderly.

"When police offices look filthy, what kind of respect are we going to get from the public?” he asked.

Though, he noted that the buildings where the station stands are not yet up to standards.

Eleazar said it's his first time to visit BCPO where he commended its development inside the compound.

For more than 38 years in the PNP service, Eleazar said he saw the hardwork and efforts of the previous PNP chiefs and its directorial staff to protect the good image of the PNP.

On top of the visits he made at the police stations, Eleazar also met with the local chief executives in the province including Governor Eugenio Lacson and Bacolod Mayor Evelio Leonardia.

Eleazar also witnessed the presentation of PNP equipment donated and loaned by local government units (LGUs) in the province, and led the awarding of outstanding PNP personnel.

Lacson said it is an honor to welcome to the province the PNP chief.

The activities, he said, are all proof of the synergy and sound collaborative partnership between the provincial government and LGUs with the PNP.

"Your presence will definitely inspire and boost the confidence and morale of our troops here in Negros Occidental, given the complexity and challenges of their present task," the governor told Eleazar during the program.

Lacson added that given the present circumstances and seeing how the pandemic unfolds, people can reasonably presume that the present crisis will not end as soon as desired by everyone thus, the expectation of a protracted taxing job of the PNP.

For his part, Leonardia expressed his elation that for the first time, the highest-ranking PNP official has set foot at the Bacolod City Government Center.

"This is an honor and, for the record, this is the first time ever that an incumbent PNP chief visited the Bacolod City Government Center,” Leonardia said after sending off Eleazar, who called on him October 10.

Leonardia said he discussed with Eleazar the need for police visibility in Bacolod, especially at this time of the pandemic.

“One of the main issues that I relayed to him (Eleazar) and Colonel (Thomas Joseph) Martir, is that police visibility is very important, especially that there is still a surge in Covid-19 cases," Leonardia said.

"We need to strictly implement basic health protocols here,” the mayor added.* (With reports from Capitol and Bacolod PIO)