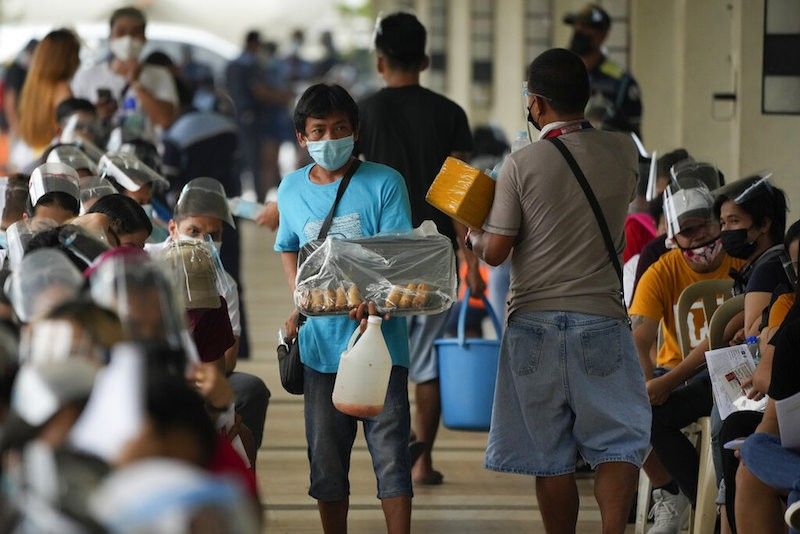 MANILA. Vendors sell food and water to waiting residents at a vaccination center in Quezon City in this file photo taken in September 2021. (File)

NEW cases of coronavirus disease (Covid-19) are declining, but this is not the time to be complacent, Department of Health (DOH) Undersecretary Maria Rosario Vergeire stressed Monday, October 11, 2021.

Vergeire said local government units (LGUs) should continue to keep the detection-to-isolation time short, or even further shorten this through active case finding and granular lockdowns.

“While we see improvement in our case trends, this is not the time to be complacent. We should maximize our gains and continue aggressively implementing our local responses,” Vergeire said.

She warned that failure to sustain or improve response at the local level will lead to an increase in cases again.

In its case bulletin Monday, the DOH reported 8,292 new Covid cases, the lowest since the 8,127 recorded on August 5 over two months ago.

These brought the cumulative case count to 2,674,814, after the removal of 40 duplicates.

Fewer tests were conducted on Saturday, October 9, reaching only 52,352, but the daily positivity rate increased again to 16.5 percent after declining to 15.9 percent on October 8. Two laboratories were unable to submit their data to the Covid-19 Document Repository System.

There were 36 additional deaths, including 21 cases that were previously classified as recoveries. These raised the Covid-19 death toll in the Philippines to 39,660. The case fatality rate declined to 1.48 percent.

As the new cases were much higher than recoveries, the number of active cases increased but remained below 100,000.

Covid cases nationwide peaked at 20,946 per day in early September, from September 6 to 12.