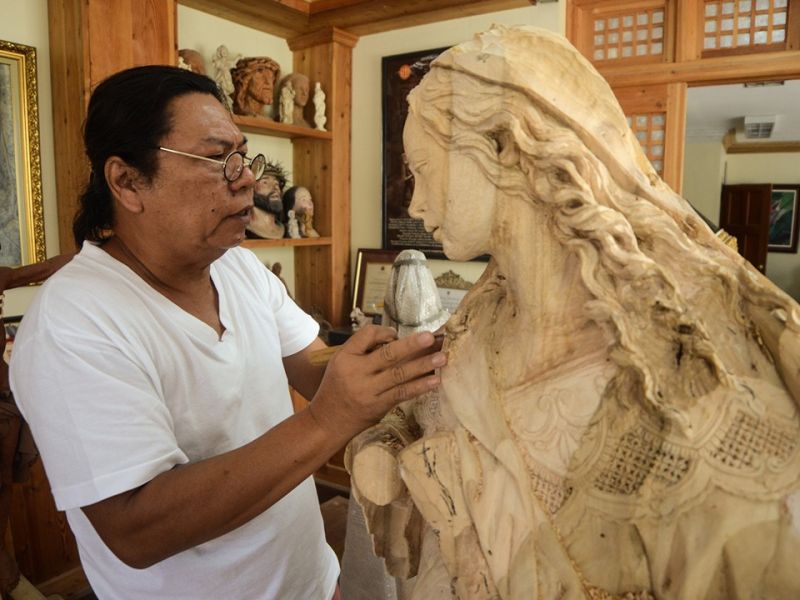 ARTIST AT WORK. Kapampangan Ecclesiastical artist Wilfredo Layug works on a wooden image sculpture of the Virgin Mary in his shop in Betis, Guagua, Pampanga. (Photo courtesy of Ruston Banal)

HOMEGROWN artists from Betis led by Wilfredo Tadeo Layug were the highlight of this year’s ManilART 2021: The National Art Fair satellite exhibit hosted at the artist’s quaint mansion in Villa Viatarit in Betis, Guagua.

ManilART is the flagship activity of the National Commission for Culture and the Arts’ (NCCA) Museums and Galleries Month (MGM), celebrated every October. In its 13th year, ManilART observes the theme “Continuing Legacies.”

This year, six satellite shows are offered located in different cities in Luzon and Mindanao.

The exhibit dubbed “The Layug Legacy and Betis Ecclesiastical Art” actually featured some of the best-known works of Layug. The exhibit stresses the contribution of Layug to Betis and the national ecclesiastical art scene. The event also featured works of Layug’s brother Edwin Layug and several artists from Mandukit Anluagui ning Sta. Ursula.

The artworks chronicle the different stages in the development of Layug’s unique style, as well as the coming of age of his other artistic expressions in painting and carving. Willy brings to the public the culmination of his years of training as well his art’s transcendence to other mediums both uniquely Filipino and Spanish inspired.

Del Sol told reporters that the pandemic is not a hindrance to appreciation of art and honoring the contribution of Filipino artists to the continuing growth of the wealth of art produced in recent years.

Layug, for his part, thanked the NCCA for continuously supporting the local wood carving industry in Betis.

The son of a simple boatman who started sculpting at five years old using clay, Layug created the image of Our Lady of Palo used by Pope Francis in the Holy Mass in Tacloban. He is also among the elite rank of “Pro Ecclesia et Pontifice” Filipino awardees.

The Kapampangan artist is the first Filipino to put up the first ever Filipiniana-inspired altar dedicated to Filipino Saint Lorenzo Ruiz and Blessed Pedro Calungsod at the prestigious Pontifico Collegio Filippino. He has done major retablos including that at the Cathedral of St. Joseph in Nueva Ecija, the St. John Cathedral in Lingayen-Dagupan, San Sebastian Cathedral in Bacolod and Cathedral of the Immaculate Concepcion in Urdaneta, Pangasinan.

Layug was also named Outstanding Guaguaeño for sculptor, Most Outstanding Kapampangan for ecclesiastical art and Best Actor in the 39th Metro Manila Film Festival for “Dukit,” an autobiography of his life as an artist.