Dapitan City celebrates feast of Our Lady of the Pillar 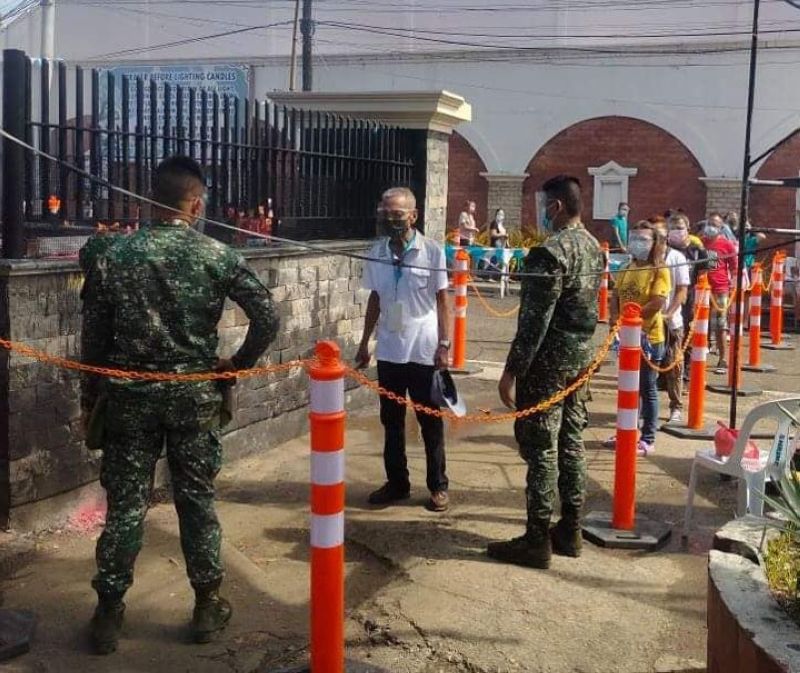 FIESTA PILAR. The City of Dapitan in the province of Zamboanga del Norte, just like Zamboanga City, celebrates Tuesday, October 12, the feast of Our Lady of the Pillar locally known as Fiesta Pilar. A photo handout shows policemen and marine soldiers watch at the entrance of the Fort Pilar shrine in Zamboanga City to ensure compliance of the health protocol. (SunStar Zamboanga)

THE City of Dapitan in the province of Zamboanga del Norte, just like Zamboanga City, celebrated Tuesday, October 12, the feast of Our Lady of the Pillar.

"We also celebrate here the feast of the Lady of the Pillar because she is our Santo Menore. Our main patron saint is Saint James the Greater, and she is the secondary patron of Dapitan," Apple Marie Agolong, Dapitan City tourism officer, said Tuesday, October 12.

Agolong said the Triduum celebration from October 9 until October 11 preceded the feast of the Lady of the Pillar in Dapitan City.

"It's a three-day celebration of the culmination of Dapitan's 390 years of Christianity," she said.

Historically and as officially documented, Dapitan City is known as the first place in Mindanao to be Christianized.

Both the Triduum and the feast of Our Lady of the Pillar celebrations were spearheaded by the Dapitan City parish headed by Fr. Patrick Calva Dalangin with the support of the City Government.

Rome recognized Dalangin as one of the researchers and historians, especially when it comes to research about Christianity, and the Catholic faith, according to Agolong.

She said the activities during the Triduum celebration include the Paseo de Dapitan, which is a walk-through experience at the city plaza where one can see how people are dressed decades ago.

A symposium entitled the role of the Augustinian Recoletos sa Ilaya, one of the oldest settlements in Dapitan City was held on October 9.

Agolong said there were also healing mass held at the Church of the Saint James the Greater.

But she said that two large LED televisions were installed at the plaza since the number of parishioners who attended the mass inside the church was limited due to the strict compliance of the protocols amid the health pandemic.

"Those who cannot be accommodated inside the church attended the mass at the plaza," she added. (SunStar Zamboanga)