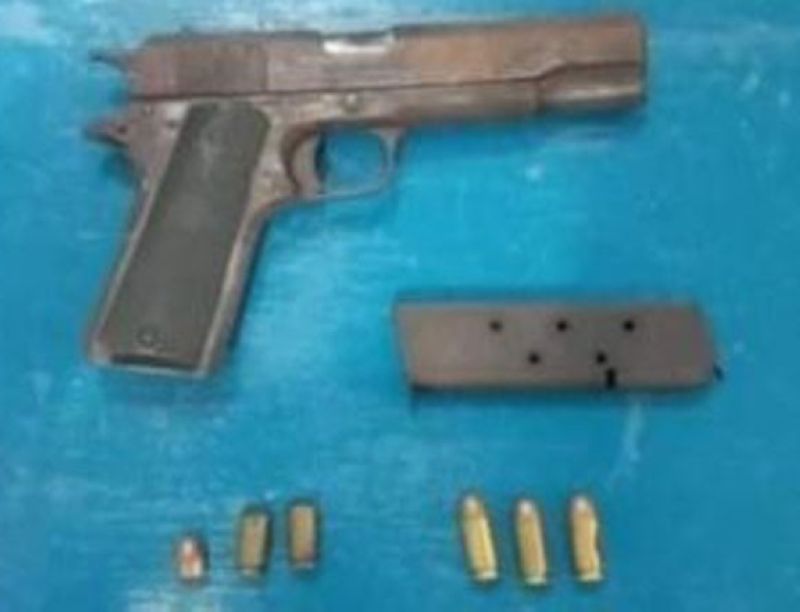 DRUG SUSPECT. A drug suspect was killed in a warrant of arrest operation by joint Marines and policemen on Sunday, October 10, in Datu Baguinda Putih village, Sitangkai, Tawi-Tawi. A photo handout shows the caliber .45 pistol and ammunition the troops recovered from the slain suspect after the shootout. (SunStar Zamboanga)

A DRUG suspect was killed in a warrant of arrest operation by joint Marines and policemen in the province of Tawi-Tawi, military officials said Wednesday, October 13, 2021.

Rosario said Sangkahan was killed in a shootout with Marines and policemen around 9 a.m. Sunday, October 10, in Datu Baguinda Putih village, Sitangkai, Tawi-Tawi.

Colonel Romeo Racadio, Joint Task Force (JTF)-Tawi-Tawi commander, said Sangkahan resisted arrest and initiated a gunfight while the Marine Battalion Landing Team-12 (MBLT-12) troops and policemen of Sitangkai were about to serve a warrant of arrest against the suspect.

“A brief exchange of fire ensued, yielding to the neutralization of Sangkahan,” said Racadio, who is also the 2nd Marine Brigade commander.

He said the operating troops recovered from the slain drug suspect a caliber .45 pistol with one magazine and three live ammunition, two empty shells and a dud bullet.

He said the remains of Sangkahan was turned over to his family for proper Islamic burial rites.

Rosario lauded the JTF Tawi-Tawi and police for the success of the warrant of arrest operation.

“Rest assured that the Western Mindanao Command will continue to render support to our partners in order to curb illegal drugs operations and other lawless activities,” Rosario added. (SunStar Zamboanga)