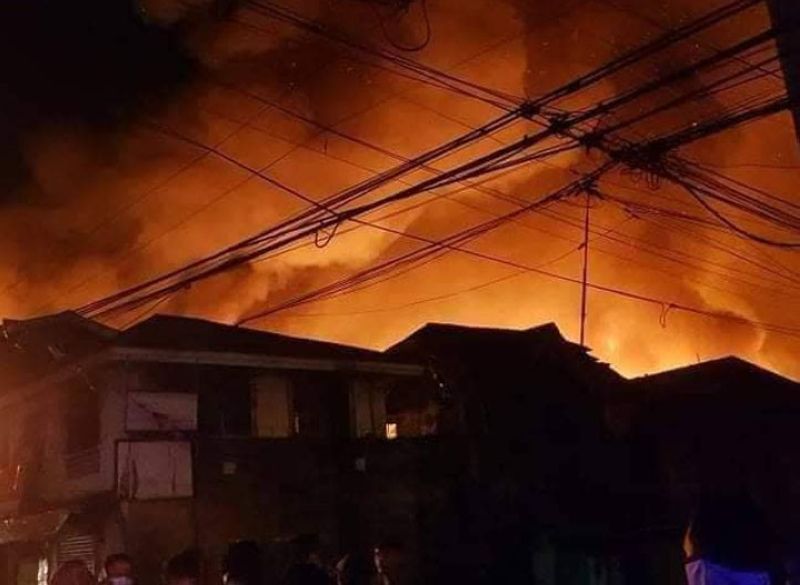 FIRE INCIDENT. One person was injured while some P4 million worth of properties were destroyed in a more than 3-hour fire early Wednesday that hit a slum community in Recodo village, Zamboanga City. A photo handout shows flame engulfingthe house that are mostly made from light materials. (SunStar Zamboanga)

ONE person was injured while some P4 million worth of properties were destroyed in a more than 3-hour fire early Wednesday, October 13, 2021, that hit a slum community in Zamboanga City.

Ortega said the fire started at the house of Akhad Asta and rapidly engulfed nearby houses made of light materials. The origin of the fire was an unattended lighted candle.

Ortega said Otro Andag, 45, one of the fire victims, informed the case investigator that they have no electricity for almost two days already as the power cable in the community snapped due to the inclement weather condition.

She said the fire was placed under control around 3:30 a.m. and was declared fire out around 4:30 a.m. Some 400 residential houses were destroyed.

She said Asari Mukaram, 35, suffered laceration on his left leg, while trying to salvage the belongings of his family during the incident. (SunStar Zamboanga)