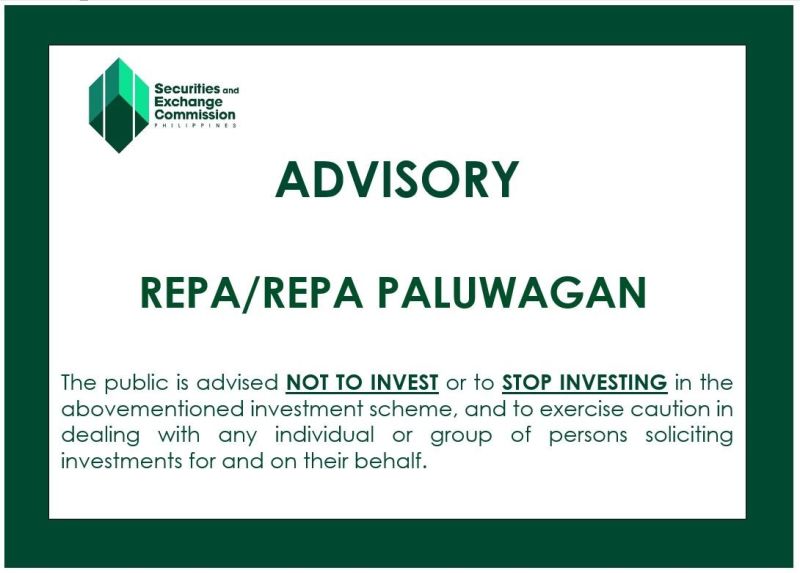 THE Securities and Exchange Commission (SEC) on Wednesday, October 13, 2021, declared Repa (Repa Paluwagan) as a "Ponzi scheme" and "does not appear as a registered corporation or partnership."

SEC issued an advisory after receiving reports and inquiries from the public asking whether Repa's operations in Bohol, Davao, Bukidnon and Cebu are registered with the Commission and if it can solicit investments from the public.

The commission said based on reports, the persons behind the said scheme acting as “administrators” (admins) and “sellers” communicate with their victim-buyers through Facebook, Messenger or other chat groups and personal transactions and offering them “limited slots” for investment packages, where one may invest P50,000 promising a return of P20,000 or an equivalent of 40 percent interest rate of return in just a short period of two weeks.

"For the information and guidance of the public, Repa/Repa Paluwagan does not appear as a registered corporation or partnership," the agency said.

SEC added "it is not authorized to solicit investments/placements from the public nor to issue investment contracts and other forms of securities since it has not secured prior registration and/or license from the Commission as prescribed under Sections 8 and 12 of the Securities Regulation Code."

The commission said Repa's operation is a Ponzi scheme, “which is defined as an investment fraud that involves the payment of purported returns to existing investors from funds contributed by the new investors.”

"They often recruit new investors by promising to invest their funds in opportunities claimed to generate high returns of investment. Thereafter, if there will be difficulties in recruiting new investors or when a large number of existing investors opt to cash out, the Ponzi scheme will collapse or result in a total breakdown and the new investors at the bottom of the line of the pyramid will not receive their returns anymore," SEC said.

It added that the income generated by the company does not appear to come from legitimate business sources but solely from the investments being paid by its current investors and by the newly recruited members.

"These false representations of lucrative return of investment within a short period of time from apparently legitimate sources effectively lure the public to invest their hard-earned money to their company," it said.

Repa's "lack of juridical personality and registration pertaining to its securities with the Commission make its activities illegal, fraudulent and injurious to the investing public," SEC said.

The agency advised the public not to invest or stop investing in any scheme offered by Repa without prior registration from the commission.

Administrators and persons behind the operation of such institutions can be criminally prosecuted and penalized with a maximum fine of P5 million or a penalty of 21 years of imprisonment or both pursuant to Sections 28 and 73 of the Securities Regulation Code.

Davao City Anti-Scam Unit chief Simplicio Sagarino revealed in a radio interview that the number of complainants against Repa, who filed complaints against its administrators for allegedly taking their investments, reached 80 as of Tuesday, October 12.

Sagarino also revealed in a recent SunStar Davao report that some of the complainants had invested as much as P11 million.