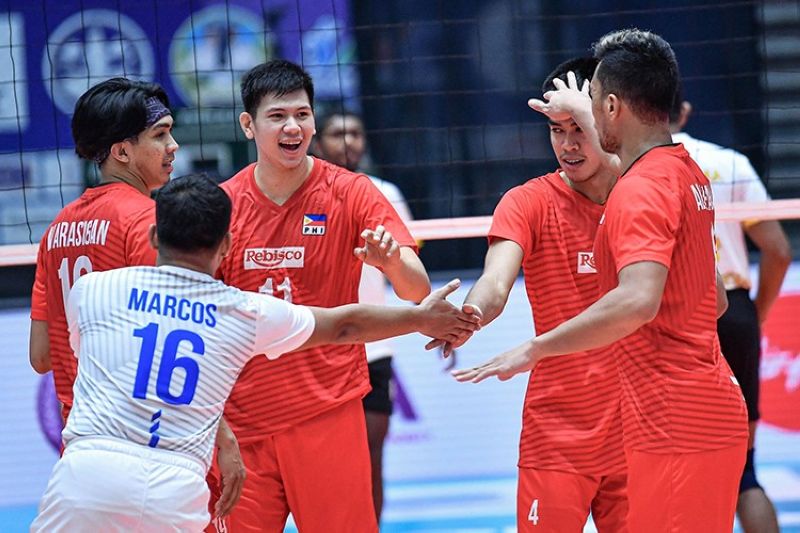 The Rebisco-Philippines will not be going home empty-handed after they beat CEB Sports Club on Wednesday night. (Asian Volleyball Confederation)

The Rebisco-Philippines will head home with their heads held high after they scrapped past the CEB Sports Club, 25-14, 22-25, 25-18, 21-25, 15-11, in their final game in the Asian Men’s Club Volleyball Championship on Wednesday at the Terminal 21 competition hall in Nakhon Ratchasima.

Jao Umandal finished the tournament strong as he racked up 28 points including the game’s deciding point that allowed the Filipinos to finish the competition in ninth place.

“Perhaps the biggest lesson we will take is to pounce on whoever is on the other side whenever we can,” De Guzman said. “After this, I know we need to work on our composure and on our focus on everything we do.”

Mark Alfafara added eight points in two sets before sitting out the rest of the two-hour and 18-minute match.

Head coach Dante Alinsunurin said he’s glad that the team already has this tournament in the bag and is looking forward to having his wards play in more to gain even more experience.

“This is our first exposure and we hope to become better for the next edition,” head coach Alinsunurin. “We are hopeful for the continued rise of the level of Philippine volleyball on its return to the international scene.”

It was Philippines’ third appearance in the men’s continental club competition and the first since the country, represented by Cignal HD, finished 12th in 2015 in Chinese-Taipei.

The Philippines booked its best finish in the Manila 2014 edition where PLDT placed seventh. (JNP)