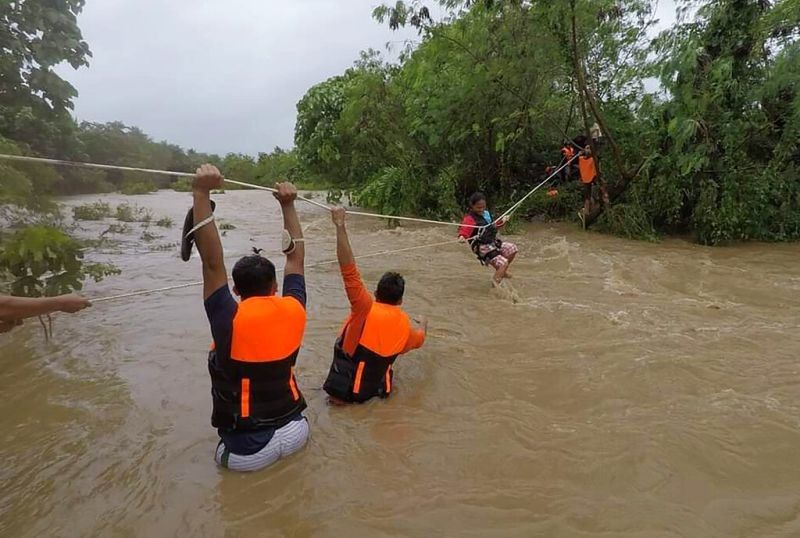 MANILA. In this photo released by the Gonzaga Municipal Disaster Risk Reduction and Management Office, a resident is pulled along a rope as rescuers wait on the other side of a swollen river caused by heavy rains from Tropical Storm Kompasu in Gonzaga town, Cagayan Province on Oct. 11, 2021. (Gonzaga MDRRMO via AP)

THE death toll from Severe Tropical Storm Maring has increased to 30 while the number of people who have gone missing went up to 14, the National Disaster Risk Reduction and Management Council (NDRRMC) reported Thursday, October 14, 2021.

The disaster management agency said it has confirmed the death of 19 individuals, and was validating 11 other reported fatalities.

As of Thursday, the NDRRMC said no local government unit (LGU) in the path of the storm has declared a state of calamity.

"Maring," which started as a low pressure area (LPA) off Camarines Norte developed into a tropical depression and merged with the remnant LPA of Tropical Depression Nando, resulting in a severe tropical storm that lashed extreme northern Luzon on October 11.

The storm, international name Kompasu, triggered landslides in Benguet Province in the Cordilleras and in Palawan. Flashfloods and massive flooding were reported in 122 areas in Ilocos, Cagayan Valley, Central Luzon, Mimaropa, Caraga and Cordillera.

Over 200 road sections and 31 bridges were rendered impassable temporarily while seven seaports were affected.

A total of 110 cities or municipalities also reported power outages. The disaster council said power has been restored in 80 of these areas.

The storm is now outside the Philippine area of responsibility. (Marites Villamor-Ilano / SunStar Philippines)