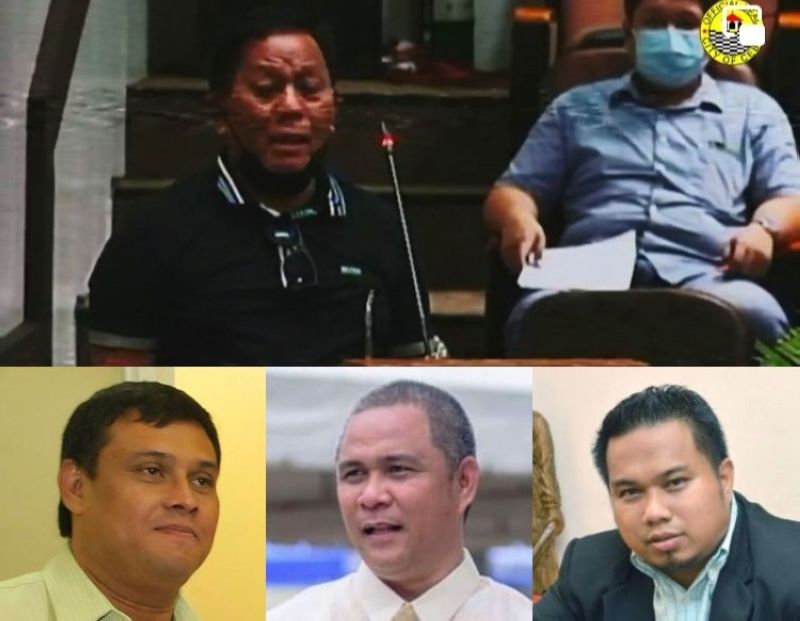 Aratea, who said he is a miner and quarry operator for 40 years and not a developer, alleged in a letter to the councilors that he was opening a road from Barangay Pardo to Barangay Toong “for free” but was stopped in favor of a contractor who was awarded the city’s project to build the road for P300 million. (Aratea is actually not doing it “for free,” as he makes his money from the “disposable” quarry materials.) Aratea was slapped with a cease and desist order by the city’s environment and natural resources office last August 25.

Councilor Archival apparently wanted to find out if the City could save the cost of opening the road by taking it off the cost estimates on the components of building the road.

And the councilors heard last Wednesday a lot more than that.

'UNDER THE TABLE.' Aratea flatly said a number of top officials received cash from him and his wife in connection with the road opening project.

Aratea used the phrase “under-the-table,” an idiom commonly used by Filipinos to refer to shady deals. Councilor Eugenio Gabuya Jr. (BOPK) drew out from Aratea that the payments were not receipted, as distinguished from receipted payments the miner made to the City.

These amounts Aratea mentioned: P250,000, P150,000, and P500 per truck of extracted materials. But Aratea was not clear on some specifics of the alleged payments, whether they were exacted from him or he made the offer, and the role of the purported payees.

Gealon, Aratea said, issued the “disposal permit.” He also said twice he was told that everything at City Hall “passes through Daluz.” He said he and his wife, with two companions, met with Daluz at his house and, on another occasion, with another companion, at Daluz’s MCWD office.

For more details, check out the Sanggunian Secretariat Facebook page for the video on the live-streamed session (start at 3:32:00).

ON RECORD, NOT UNDER OATH. Resource persons at local legislative sessions at times complain of being bullied by legislators. Not in the Cebu City Sanggunian, which generally is courteous to its guests.

But in Aratea’s case, the guest used the forum to lash at city officials. The rules apparently don’t prohibit it. While Acting Vice Mayor Dondon Hontiveros gave Aratea a lot of leeways, he wondered aloud if it was the place to make specific accusations.

Aratea did not speak under oath, persons who appear before the City Council are not so required. But everything was recorded: in the minutes and the journal, according to Sanggunian Secretariat head Atty. Charisse Piramide. At one point, Councilor Dave Tumulak reminded Aratea that everything he said was on record and even broadcast. To that and the caution from Majority Floorleader Raymond Alvin Garcia, Aratea said he was ready “to face the consequences,” as “all I said (are) true.”

RAYMOND ENCOURAGES LAWSUIT. Councilor Garcia pointed out that Aratea was issued the cease and desist order from Cenro because he lacked permits and other papers, which the quarry operator reportedly admitted in a previous appearance before the City Council.

Garcia said Daluz is a consultant to Mayor Edgardo Labella and advises the chief executive on various matters. Which must explain why “everything has to pass through Daluz.”

On the alleged pay-offs, the councilor told Aratea that the payments might have been made for other, valid reasons, such as consideration for the quarried materials. Aratea could be sued for libel but could also sue the officials he named. And Garcia said he was encouraging him to file his complaint in the proper forum.

COMPARED TO SAAVEDRA’S CASE. Aratea publicly made defamatory statements. Could he claim absence of malice for the reason that his accusation was privileged communication?

And what made his case different from the “whistle-blowing” done by businessman Crisologo Saavedra, who at about the same time alleged a rigged bidding on traffic and CTV equipment the City was buying?

NEXT ACTION. Aratea must know that if he has evidence that will stand up in a legal proceeding, he has to the ombudsman and the anti-graft court. The City Council provides at most the springboard for the next action that a complainant might take. The City Council serves a useful purpose: to call public attention to what could be wrongdoing that otherwise would never be exposed.

Aratea’s main interest though is to save the losses that he said were piling up since the cease order was issued. Would the top officials he already publicly shamed give him back the project?

Aratea might, if the City Council adopts the minority’s position that his initial work on the road would reduce the cost of building it – and the executive officials would heed the Sanggunian’s position.