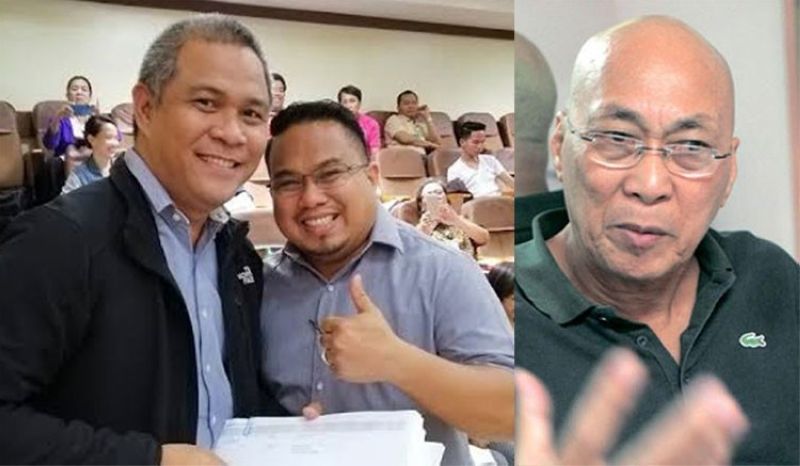 THIS week's October 13 session of the Cebu City Sanggunian produced three attacks on City Administrator Floro Casas Jr., topped no doubt by the accusation of quarry operator Benito Aratea that Casas was one of at least five city officials whom he gave cash to pursue his road opening/quarrying project in Pardo.

Aratea, who made money from materials displaced by the road clearing, told the City Council Wednesday he could prove his charge and named some witnesses to the alleged payoff, vowing that he was telling the truth and ready "to face the consequences." But Casas, with City Attorney Rey Gealon, who was among the five tagged by Aratea, denied they had transacted with the quarry operator. And so far, Aratea made damaging and allegedly defamatory claims but produced no evidence.

The two other developments in which Casas was assailed:

[1] Questioned by Minority Floor Leader Nestor Archival Jr. and BOPK colleagues Councilors Eugenio Gabuya Jr. and Lea Japson, the sponsoring councilor, David Tumulak, deferred his motion to approve the city administrator's request for refund of the amount of about P400,000.

[2] Whistleblower Crisologo Saavedra Jr. earlier accused Casas of "usurping" the functions of the mayor since Mayor Edgardo Labella started his series of medical leaves. Last Wednesday, Saavedra pushed that theory by arguing that Casas's term was coterminous with Labella's.

The first merely involves procedure; the second may have no specific legal basis.

REFUND OR PAYMENT? Councilor Gabuya wondered why the claim for refund was brought up before the Sanggunian as it must have been budgeted in 2019 and 2020. Since it was raised to them anyway, the councilors must scrutinize it, Gabuya said.

Councilor Archival said the City Council cannot just approve it without details of the spending attached to the resolution. Councilor Japson said it was for, among others, food at a hotel, noting that the request was for refund and payment, which was which? Councilor Alvin Dizon, also of BOPK, slammed the alleged lack of proper concern in the administration's spending. "The money does not belong to Casas," Dizon said.

Majority Floor Leader Raymond Alvin Garcia said public officials at times have to use their own money and are entitled to a refund for legitimate expenses. He said there's a "prior-years account" that pays for past unpaid expenses.

A recurring problem in the current Sanggunian on the process of incurring obligations to pay and approving payments is the minority's avowed passion to check details and specifics, routinely asking for supporting documents, and the majority's seeming penchant to rush things, usually not providing the requested information. Dizon saw that as a cavalier attitude on spending of precious resources, "more so during a period of calamity."

SNAFU ON REQUIREMENT. It must have been the accounting and treasurer's office that told Casas the Sanggunian approval was required. Apparently, there's lack of coordination of information between the legislative and the executive.

As to the supporting papers, Casas must have submitted them to accounting and treasury. What the City Council got was just the request for refund coursed through Councilor Tumulak, who corrected the lapse by asking for the documents the councilors wanted to "peruse."

CASAS'S POWER. Businessman Saavedra, pressing his request to disable Casas as city administrator, argued that since he was appointed by Mayor Labella, the city manager lost the basis to function as such when the mayor sidelined himself and Vice Mayor Michael Rama took over as acting mayor. Thus, Saavedra's charge of usurping functions.

Technically though, which is how the government operates, Casas' term ends when Labella's term ends, which doesn't happen before June 30, 2022. Acting Mayor Rama made that point when the issue was raised when he was the City Council's presiding officer.

The solution the Sanggunian earlier offered was to request Rama to ban Casas from signing for Mayor Labella contracts and other papers while Mike is acting mayor.

The Sanggunian Wednesday advised Saavedra to restate in another letter complaint his gripe about Casas's tenure so it could take up his concern in a future session.

Saavedra himself faces questions on credibility in the wake of disclosures about his role and motive, namely, (a) he was supposed to represent the interest of a competing bidder on the traffic lights and CCTV project but the same firm reportedly disowned him as its representative, as disclosed to the City Council by a Bids and Awards Committee lawyer; and (b) he filed a certificate of candidacy for Cebu City mayor as an independent in the 2022 election.

Saavedra though filed his complaint "as a taxpayer and advocate of people's interest." He was reported to be a consultant of the company but he didn't present himself as the company's rep in his twin complaints before the City Council.

As to becoming a politician himself, Saavedra couldn't be much different from some BOPK and Barug councilors trying to defend public welfare and at the same time striving to protect party interest and political career.