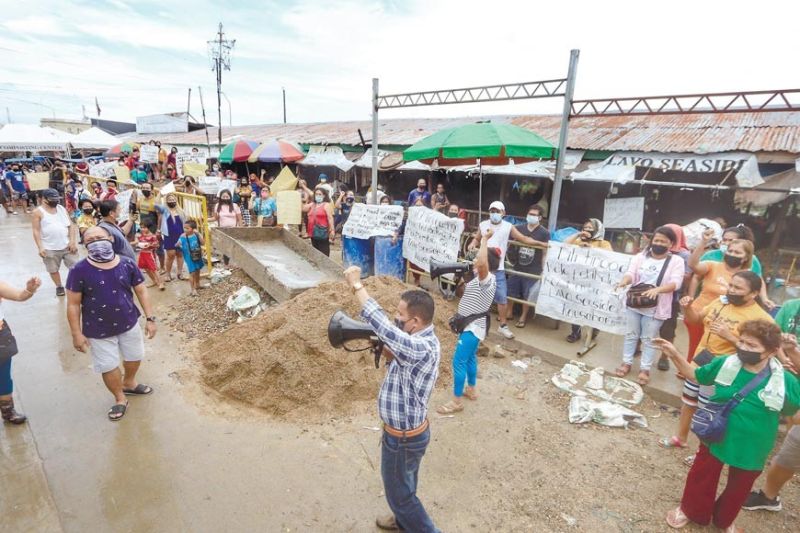 RALLY. Tensions slightly rose between vendors who are supporting and opposing the development of the Carbon Public Market who met in two separate rallies at the M.L. Quezon Blvd in Barangay Ermita, Cebu City on October 15, 2021. / Amper Campaña

MORE than 100 vendors have showed their support for the continued modernization of the Carbon Public Market on M.L. Quezon Blvd. where 544 stalls of ambulant vendors will be built.

Zosimo Potot, president of the Landing Vendors Organization (LAVO) seaside, led Friday, October 15, 2021, the rally of its members, who temporarily stopped selling to show their support for the modernization.

Potot belied rumors that the ambulant vendors of Lavo seaside opposed the modernization, saying only about six of its 183 members had expressed opposition to the development.

“It’s not true that many opposed the development. Only six members opposed it. We are showing you the real voice, the real change we are enjoying from our City Government,” Potot said.

The rally occurred after a downpour, and Potot used the occasion to compare the poor condition of the undeveloped blocks for vendors where water and mud collected, with Block 1, the model unit, where this did not occur.

“We are very happy that the flooring has been elevated. We are very happy with this project provided by Lavo seaside. The vendors are making good sales. Customers like it there because there is no mud and the stall is tidy,” Potot said.

Potot said what was going on was not a demolition but a renovation because after their old stalls made of light materials were destroyed, these were replaced with new stalls made of steel materials. (PAC / CTL)