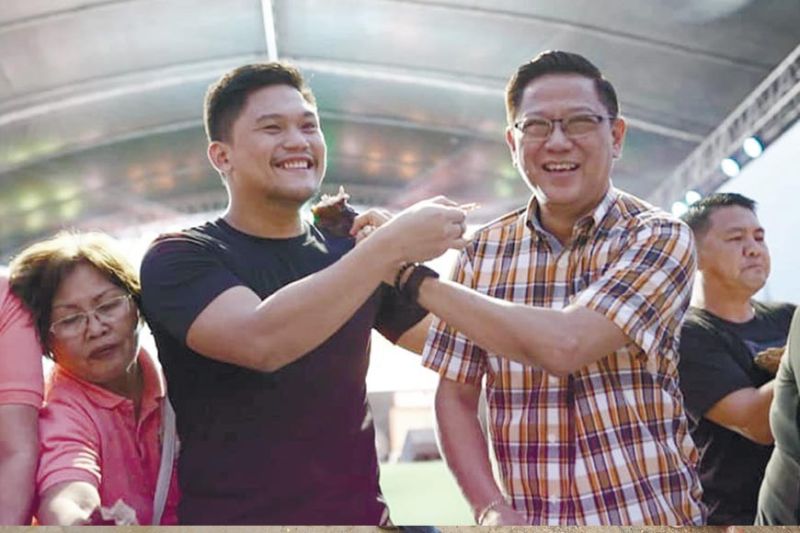 Gullas, who heads the administration Alayon Party, said he initially endorsed Bucao to run for mayor following an agreement that he and his grandfather, Cebu Rep. Eduardo Gullas, made just before the 2019 midterm elections.

The younger Gullas will be running as congressional candidate of Cebu’s 1st District. He is running unopposed.

Gullas clarified the matter in a statement he sent to SunStar Cebu on Saturday, Oct. 16, 2021.

“It is not true that I didn’t endorse Vice Mayor Alan (Bucao), actually he is the one I endorsed to our leaders once they asked me who will be our mayoralty candidate in Talisay.

But he was surprised that the city’s 22 village chiefs wanted him to field another candidate and let Bucao finish his last term as vice mayor.

Bucao, who received a fresh mandate as vice mayor back in 2016, still has one term left.

Instead, the village chiefs wanted Gullas’ wife, Rhea, to run as city mayor.

When he insisted that Bucao would serve as Alayon’s standard bearer in Talisay City, the village chiefs reportedly said they will support Gullas’ candidacy for congressman but not the vice mayor.

The village chiefs cited that they wanted Gullas’s program and projects in the barangays to continue as one of their reasons they refused to endorse Bucao.

“You can confirm this with all the barangay captains if I’m telling the truth or not. Everytime I get to explain this story to people, I would always tell them, walay mawagtang nako if mu ingon kos tinuod. Daghan mawagtang nako if mamakak ko ninyo kay wala nay mutuo nako kon bakakan mo nako,” Gullas added.

(I would lose nothing if I tell the truth. I risk losing everything if I lie to my constituents)

Gullas said like Bucao and his city councilors, the city’s village chiefs have been loyal to them for so many years and should be consulted in matters concerning the party.

Bucao, who has been a longtime ally of the Gullases, decided to break ranks with them by running for city mayor against the younger Gullas’ wife.

In a statement, Bucao accused Gullas of reneging on his and his grandfather’s promise that the former will serve as the party’s standard bearer during the 2022 local elections.

Gullas said after he recovered from Covid-19 back in February, he decided to meet with Bucao and his wife, Talisay City councilor Marietta “Yehyen” Bucao to talk to them concerning the decision of the city’s village chiefs.

Gullas said he made the move to talk to Bucao and his wife after reading an article concerning what transpired with his meeting with the village chiefs.

He asked Bucao if he was willing to continue serving his last term as vice mayor following the decision of the city’s village chiefs.

Bucao and his wife told Gullas that they wanted to talk to their supporters first and asked the mayor for at least three weeks before they will make a decision.

After three weeks, the three met again and this time, Bucao and his wife told Gullas that he was willing to finish his last term while his wife will run for reelection.

“Around three weeks have passed and we met again. They then said, “Grupo man ta mayor, willing rami mo dagan as VM and Yehyen as councilor under Alayon,” Gullas said.

(We are in one group, mayor. I am willing to run as VM while Yehyen will run as councilor under Alayon)

Gullas was relieved of what Bucao and his wife told him and he asked the couple to formalize this before two meetings with their allies and leaders.

But while he thought that everything was settled, Gullas was surprised that some personalities reportedly allied with Bucao have started attacking him on social media and criticizing his policies, particularly on his handling of the Covid-19 crisis in their city.

But when he confronted Bucao about this, the vice mayor only denied and claimed that he had no hand in the black propaganda against Gullas.

He further criticized Bucao for claiming that he was being influenced by the party’s allies, particularly their village chiefs.

“In my opinion, when making decisions for a party, there are no members at the bottom or at the top. The decision of the party should be a consensus among its members. In fact, I was disgusted when he (Bucao) described our leaders as “ubos” (lower rank). If that’s the case, you’re not a leader, you’re a boss. I don’t want to be that type of guy, I have the respect of our barangay captains and our leaders because I value their opinion and they all have a say in the decision making in Alayon,” Gullas added, in a mix of English and Cebuano. (REV, JKV)