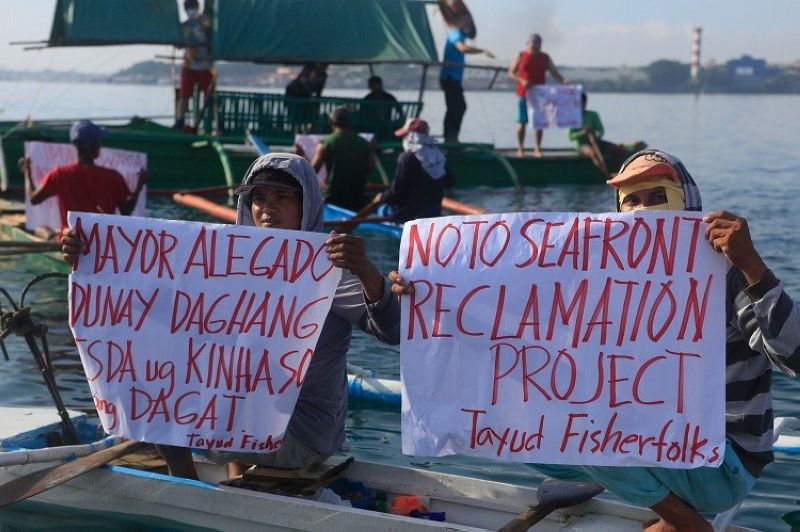 AT LEAST 120 residents signed a manifesto of appeal asking President Rodrigo Duterte to stop the Seafront City project in Barangay Tayud in Consolacion, Cebu, saying it will not only affect their livelihood but also their homes.

They are seeking the stoppage of the town’s 235.8-hectare reclamation project because their livelihood depends on the shipyard operations.

On week, at least 2,000 workers of the six affected shipyards sent a petition to President Duterte, expressing opposition against the project as they too were not consulted about the proposed reclamation.

Last Sept. 13, members of Shipyard Association of Consolacion Cebu (SACC) staged a protest against the project, saying it is opposing the proposed reclamation “because the local government of Consolacion has not given any feasible plans to protect the various shipyards and affected locals in the area.”

“The reclamation project will result in the unemployment of thousands due to the closure of the commercial shipyards of Consolacion, all of whom serve 60 to 70 percent of all ships in Central Visayas and Northern Mindanao. The shipping industry of these areas will be greatly affected, most especially the vessels in Cebu,” SACC said in a statement.

The signatories of the new petition include habal-habal (motorcycle-for-hire) drivers, tricycle drivers, operators of carenderia (eatery) and owners of boarding houses that serve workers and visitors of the six shipyards that operate in Tayud, whose foreshore land the Consolacion Municipal Government wants to take over to pave the way for its reclamation project.

The other signatories are fishermen who not only live along the shorelines of Tayud, but also rely on fishing as a source of income.

“We are poor residents who can’t afford to live in expensive subdivisions or get an apartment unit. We survive on fishing and doing hard labor like working in shipyards that are located in our barangay. Some of us, like the vendors and tricycle and habal-habal drivers, earn from the operation of the shipyards and other businesses in our community,” they said in their petition they signed on Sunday, Oct. 17, 2021.

The petition addressed to the President further said: “The risk of losing both our homes and our source of livelihood while we are still suffering from a pandemic is unbearable. We are begging that you listen to our pleas.”

To disprove claims reportedly pushed by Consolacion Mayor Joannes Alegado and other town officials that Tayud is no longer rich in marine resources, a group of at least 20 fishermen went out to the sea near the shipyards to catch fish early Sunday morning.

The fishermen were later joined in by their wives and children for the ceremonial signing of a petition addressed to President Duterte at the mangrove swamp in their area to show how the proposed project would lead to the destruction of the marine habitat there.

“We are registered voters of Barangay Tayud and most of us have lived in the barangay all our lives. This was where we were born, where we studied, got married and raised our children,” the petition read. “Despite the development that is now being enjoyed by our locality, many of us continue to fish or earn from the bounty of the sea, something that we inherited from our forefathers. Mr. President, we are knocking at your kind heart and are appealing that you listen to our pleas.”

They lamented that they were never consulted by the municipal government nor were they invited in a public hearing on the project.

The Tayud residents were the second group who filed a petition to the President against the project.

Incidentally, Securities and Exchange Commission records showed that the LCSDC was only incorporated last Oct. 31, 2019, with a capitalization of P10 million. Among the incorporators were incumbent Rep. Victor Yap of Tarlac and his brother, Jose Yap Jr., who is former mayor of San Jose town in Tarlac.

Based on the 2020 census, Tayud’s population has reached more than 23,000. At least 31.25 percent of the population are minors who depend on their parents for survival.

While they are not against progress and development, residents and the other affected sectors are asking government officials to also consider them and their welfare in the decision-making process.

“The Consolacion LGU (local government unit) must focus on addressing the basic needs and well-being of the residents, especially that we’re struggling in the middle of the Covid-19 pandemic,” said Edward Ligas, former Commissioner of the Presidential Commission on Urban Poor.

He further said that “Mayor Alegado and LCSDC should not pursue this reclamation project as it will lead to the loss of livelihood of fisherfolk and other workers.”

“It is also very concerning to hear that the LGU does not have any plans to help those who will lose their work due to the reclamation project to find a new job,” he said. “Our voice is clear: We oppose the Seafront City reclamation project as it will destroy lives. We invite everyone to join us to help the people of Consolacion,” Ligas said.

In an earlier interview, Alegado said the Consolacion Municipal Government wants to use the foreshore of the area of Tayud to build its Seafront City Reclamation Project.

Alegado said he wants Consolacion to develop through this project because it will also help a lot of people when it becomes a commercial area of the town, and it could ease the traffic going to northern Cebu. (KAL with PR)
< Previous PageNext Page >