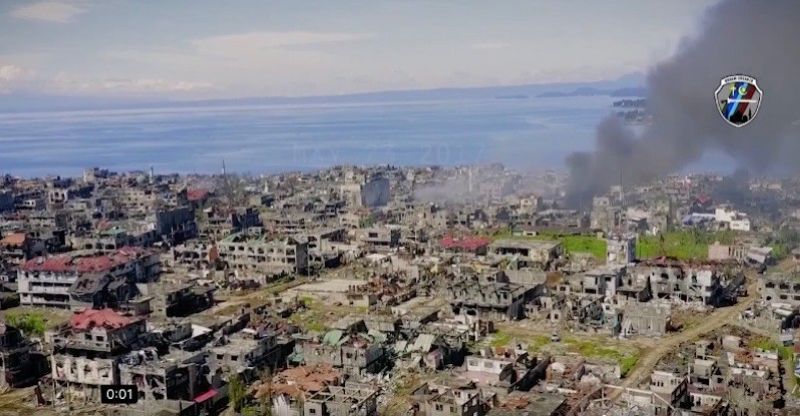 THE government will remain steadfast in securing the nation against terrorism, violent extremism, and other lawless elements, President Rodrigo Duterte said Saturday, October 16, 2021, as he led the commemoration of the fourth anniversary of the liberation of Marawi City.

In his speech during the event held in Marawi City in Lanao del Sur, Duterte expressed hope that with the support of the public, the nation will overcome any challenge that may test its strength and the unity of its people.

“Let us therefore continue working as one to secure a better, safer, and more prosperous future for all of Marawi,” he said.

At the same time, he recognized the sacrifice and bravery of soldiers and police personnel who fought for several months to defeat Islamic State-linked Maute terrorist group who occupied the city.

“Let me again give recognition to our soldiers and police personnel, and local constituency for their bravery, sacrifice, and determination in defending and liberating Marawi City after five months of battle,” the President said.

“I pray to God that it will never happen ever, ever again,” he added.

The government, he stressed, is doing its best to expedite the completion of rehabilitation projects at the soonest possible time, noting it is committed to bring back the city’s glory.

The chief executive also commended the hard work of the Task Force Bangon Marawi to accomplish the programs under the Bangon Marawi Comprehensive Rehabilitation and Recovery Program.

He pointed out that by rebuilding the lives of the displaced families, restoring damaged properties, and revitalizing disrupted socio-economic activities, the task force stayed true to its commitment as agents of progress and catalysts for real change.

Also during the event, Duterte witnessed the distribution of Certificates of Title for permanent housing units from the National Housing Authority (NHA) and turnover of financial assistance from the Cooperative Development Authority (CDA), among others.

He also inspected the newly constructed Jameo Mindanao Al-Islamie or the Grand Mosque, considered the biggest house of worship in Marawi City.

After announcing the liberation of the city from terrorism on October 17, 2017, the President issued Administrative Order No. 3 and created the Task Force Bangon Marawi (TFBM) to start reconstruction efforts. (PR)