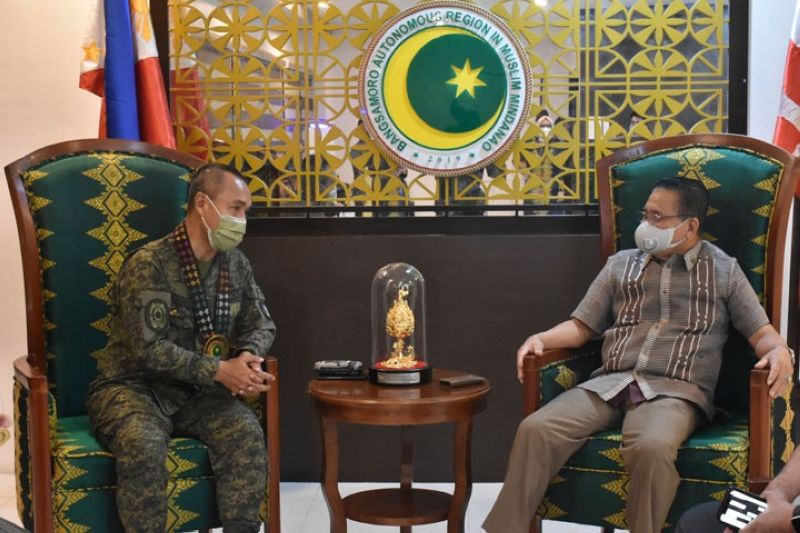 ZAMBOANGA. Major General Alfredo Rosario, Jr., commander of the Western Mindanao Command (Westmincom), expresses his gratitude to Bangsamoro Autonomous Region in Muslim Mindanao (Barmm) Chief Minister Ahod Balawag Ebrahim for the unwavering support to the quest for lasting peace and sustainable development in the region. Rosario (left) paid a courtesy call on Ebrahim (right) on October 14, as the newly installed commander of the military units in the western and central parts of Mindanao, which includes Barmm. (SunStar Zamboanga)

Rosario paid a courtesy call on Ebrahim on October 14, as the newly installed commander of the military units in the western and central parts of Mindanao, which includes Barmm.

The visit was aimed to establish a good relationship with all the local chief executives and stakeholders within the area.

“Let us sustain this good relationship for our fellow Filipinos and our beloved country. By strengthening our collaboration and cooperation imbued with our commitment to serving the people, we will be able to stimulate tangible and invaluable outcomes in our common goal,” Rosario said.

Ebrahim welcomed Rosario at his office at the Office of the Chief Minister Building proper, Barmm Compound in Cotabato City.

During their meeting, they discussed matters concerning peace and order and the development of the Barmm.

Ebrahim thanked Rosario for the military’s efforts to keep the communities safe and secured and for risking their lives to preempt the terror ploys of the malefactors.

Ebrahim also vowed to strengthen collaboration with the military in fighting terrorism and neutralizing lawless elements in the provinces under his jurisdiction. (SunStar Zamboanga)