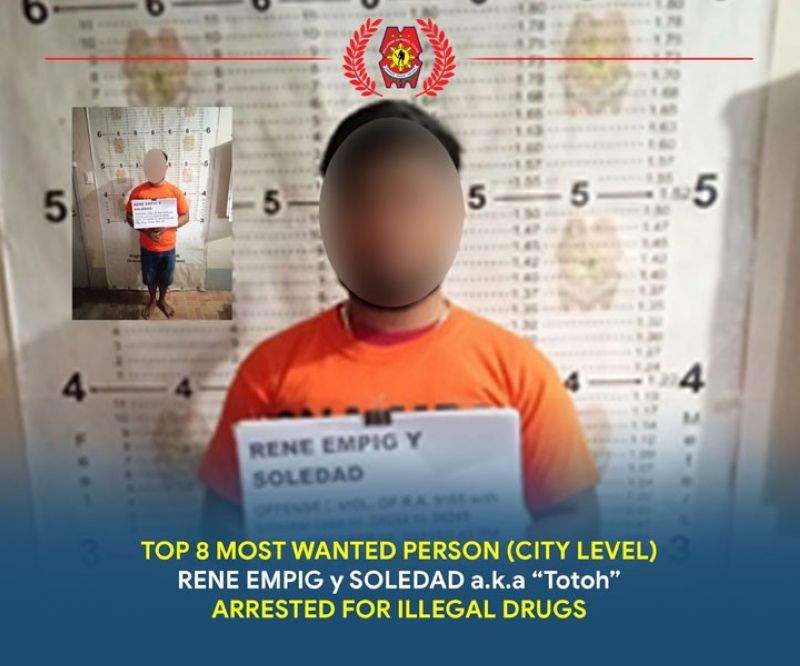 ZAMBOANGA. Government operatives arrest Saturday, October 16, the Top 8 most wanted person of Zamboanga City in a law enforcement operation in the province of Sultan Kudarat. A photo handout shows the mugshot of the arrested suspect, Rene Empig. (SunStar Zamboanga)

GOVERNMENT operatives have arrested the Top 8 most wanted person of Zamboanga City in a law enforcement operation in the province of Sultan Kudarat, a top police official announced Sunday, October 17.

Reyes said the Empig was arrested in a warrant of arrest operation in Gapok village in Senator Nonoy Aquino town around 2:42 p.m. Saturday, October 16.

He said that Empg has standing warrant of arrest for violation of Sections 5 and 11 of Republic Act 9165 otherwise known as the Comprehensive Dangerous Drugs Act of 2002 issued on April 10, 2018.

He lauded the operatives of this city and Sultan Kudarat for the successful operation that led to the arrest of Empig.

Reyes stressed that the successful joint enhanced police operations of the local police manifest its strong commitment to continue to work hand-in-hand with other law enforcement units in the fight against wanted persons, criminality and other forms of illegal activities. (SunStar Zamboanga)