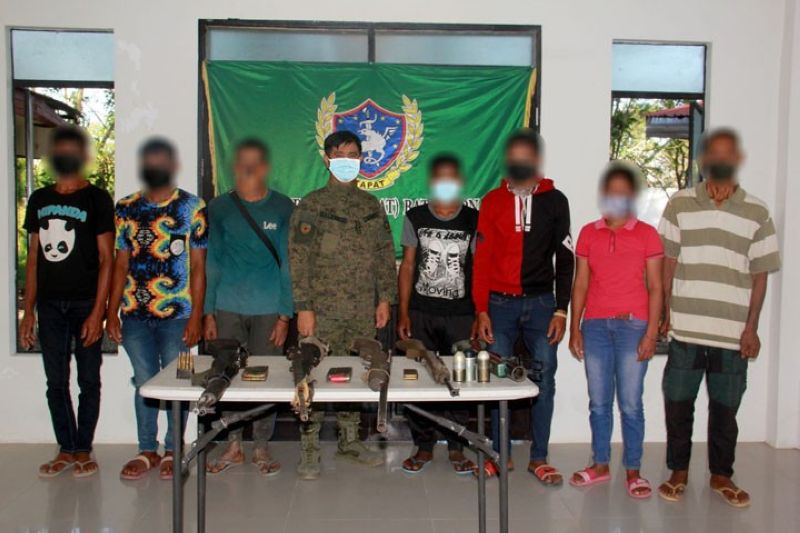 The rebels handed over their firearms to prove their sincere intent to abandon their armed struggle.

"The successful surrender of the seven CTG (communist terrorist group) members is a result of the collaborative efforts of the Community Support Program operators of this (7IB) battalion," Valencia said.

During the debriefing, Oyet, one of the seven surrenderers, expressed his condemnation to the communist terrorist group, which he described as a “Godless” group.

He narrated that since they joined the group, they exhausted their time and strength moving from one place to another to dodge the military operations.

"We regret our decision of joining the NPA terrorist. Gladly, the 7IB is here to accept us without second thought," Oyet said.

Major General Juvymax Uy, commander of Joint Task Force (JTF)-Central, said the strength and capability of the NPA in central Mindanao continue to dwindle as more and more members of the group chose to lay down their arms and return to the folds of the law.

"I commend our troops, our partners, and stakeholders for the significant breakthroughs in our campaign against terrorism and violent extremism," Uy said.

A total of 94 NPA rebels have surrendered to military authorities in central Mindanao since January this year. They handed over a total of 73 firearms.

"The military is always willing to welcome former rebels and violent extremists who wish to lay down their arms, go back to the mainstream society, and live a peaceful life with their family," Rosario added. (SunStar Zamboanga)