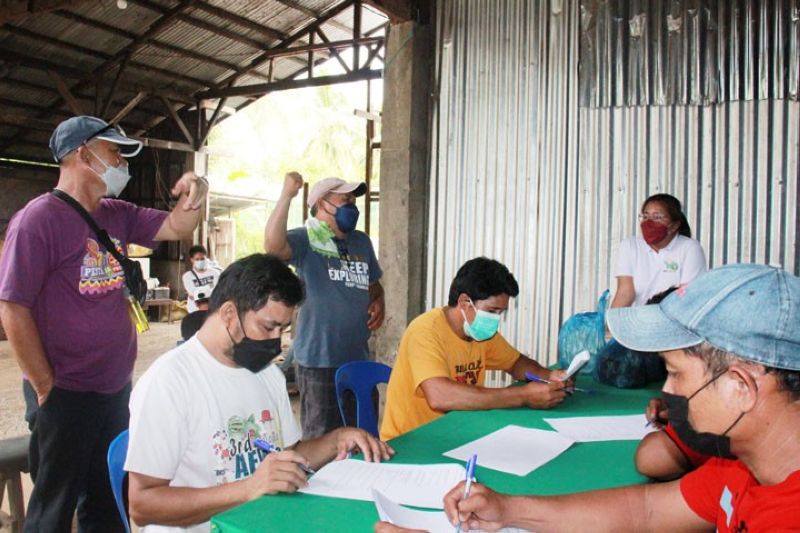 ZAMBOANGA. The Investment for AFMP Planning at the Local and National Levels (I-PLAN) of the Department of Agriculture (DA) conducts a survey with the poultry owners and backyard chicken growers in three towns of Zamboanga del Norte to gathered needed in crafting of Value Chain Analysis on Native Chicken in Mindanao. A photo handout shows some of the backyard native chicken growers answer the survey form in one of the three Zamboanga del Norte towns. (SunStar Zamboanga)

THE Investment for AFMP Planning at the Local and National Levels (I-Plan) component of the Regional Program Coordinator Office (RPCO)-Zamboanga Peninsula of the Department of Agriculture (DA) has conducted a survey with the poultry owners and backyard native chicken growers in three towns of Zamboanga del Norte.

AMFP refers to the Agriculture and Fisheries Modernization Plan.

Engineer Tessie Montano, I-Plan component head, said that the key informant interview with poultry owners and backyard chicken growers were conducted in the towns of Siayan, Sindangan and Salug.

Montano said that data they gathered will be used as basis to the crafting of Value Chain Analysis (VCA) on Native Chicken in Mindanao.

Montano said there were only five respondents in Siayan. Four of the five respondents are backyard chicken growers while the other one, Minda Caberte, owns a poultry farm in Gonyan village, Siayan.

Sindangan had 10 respondents, one of them was poultry farm owner Aurelio Montecarlo whose farm is located at Piao village.

For the municipality of Salug, there were eight respondents who are members of the Salug Farmers Multi-purpose Cooperative (Safamco), which is now growing native chickens as recipient of two modules from Department of Agriculture-Zamboanga Peninsula.

The cooperative has formulated organic feeds for chickens and other livestock.

For Zamboanga Sibugay, the survey was conducted in the municipalities of Ipil, Buug, Kabasalan and Diplahan.

Last leg of the survey is in the province of Zamboanga del Sur. The towns that will be covered will be known this week.

According to Planning Officer Reymalyn Ragmac that some of the respondents will be invited to participate during the Mindanao-wide Stakeholders Consultation on the competitiveness of Native Chicken.

Ragmac said that sharing of good practices, issues and constraints with other stakeholders is primary objective of the activity to come up with a realistic value chain analysis. (SunStar Zamboanga)