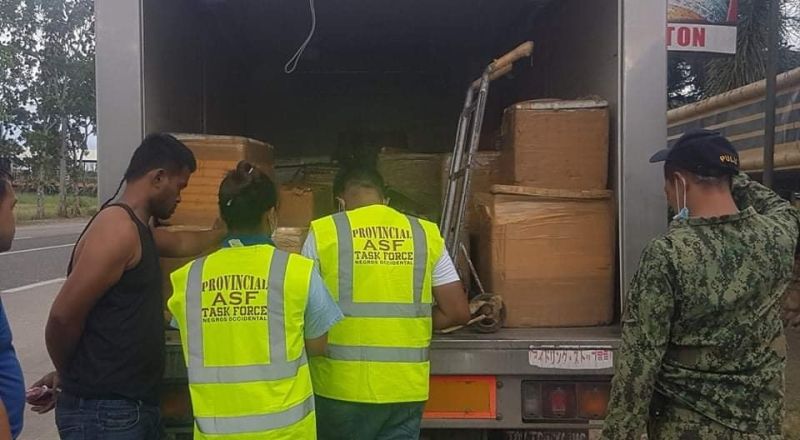 THE Provincial African Swine Fever (ASF) Task Force of Negros Occidental has so far intercepted about P1.2 million worth of assorted pork products coming from other provinces in the country affected by the dreaded disease affecting swine.

Provincial Veterinarian Renante Decena, in his report to Governor Eugenio Jose Lacson on Monday, October 18, said the task force apprehended 4,051.74 kilograms of pork and other pork-related products from January 1 to October 15, 2021.

Decena, also the co-chair of the task force, said these were apprehended in seaports, airport, checkpoints and local government units (LGUs) in the province.

Negros Occidental still prohibits the entry of live pigs, pork, and pork products coming from Luzon, Mindanao, and Eastern Samar, which all have confirmed cases of the swine disease.

This is part of the measure to protect its P6-billion swine industry by maintaining its status as an ASF-free province.

From October 9 to 15 alone, the task force seized P9,628 worth of pork and pork-related products from hand-carried and check-in baggage arriving at the Bacolod-Silay Airport.

Decena also reported that the quarantine team has inspected 1,648 incoming vehicles and refrigerated container vans at different ports of entry in the province.

"All products allowed to enter the province were properly inspected and found to have complete documents," Decena said.

For the same period, a total of 2,991 hogs, meanwhile, were shipped out of the province to different destinations in Luzon and Visayas.

Some 55 Livestock Transport Carriers used for the said purpose were disinfected upon arrival at the different ports of entry, he added.