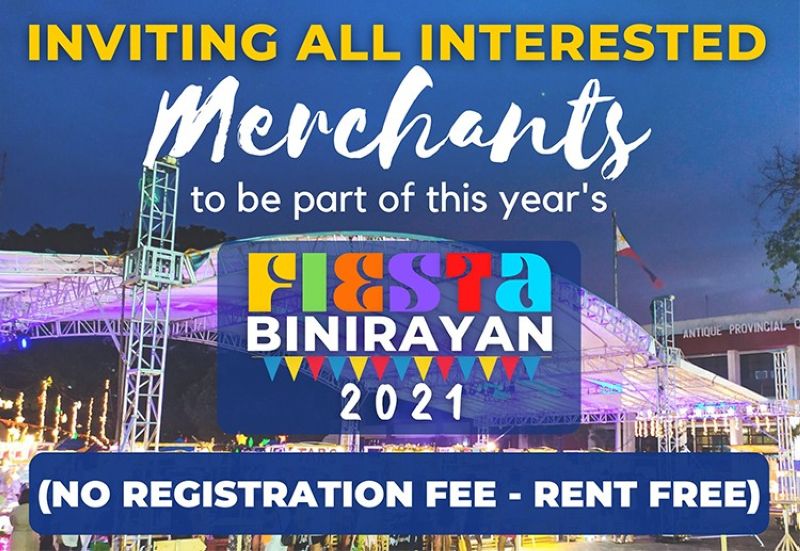 SAN JOSE DE BUENAVISTA, Antique – Organizer of the 2021 Binirayan Festival will introduce face-to-face activities and virtual events to mark the annual celebration set from December 5 to 21.

Provincial tourism and cultural affairs officer Juan Carlos Perlas, during an interview Tuesday, said they held simplified and trimmed down events last year because of the coronavirus disease 2019 (Covid-19) pandemic.

“We are holding the Binirayan Festival this year slating several activities but then it will be a combination of face-to-face and virtual to still limit public exposure,” he said.

Some of the events identified for this year are the Fiesta Binirayan, “Tanuman” or agri-fair, opening salvo, float parade, float display, and the Binirayan Sikad Lagaw or the bike festival.

There are also virtual activities such as the Malay-Ati Competition or Tribe Competition and Lin-ay Kang Antique or the Search for Miss Binirayan.

“The holding of the combination of face-to-face and virtual activities (is considered) because the economy in the province is already slowly being reopened,” he said.

Perlas added that the Fiesta Binirayan is a Christmas bazaar where fully vaccinated spectators could come for their shopping and dining from December 5 to 21 at the Evelio B. Javier Sports Complex.

"Tanuman”, which will be opened from December 6 to 21, will serve as a venue for the sale of plants and other agricultural products.

“On December 12, there will be an opening salvo with a float parade, to be participated in by all 18 municipalities, from Malandog Esplanade to the town proper of San Jose de Buenavista where there will be musical lights arrangement,” Perlas said.

The floats, which will depict the uniqueness of each municipality, will be displayed at the capitol ground from December 12 to 18.

The municipalities will have their tribe entries for the Malay-Ati performing online.

Last year, only the capitol market was opened for food items and limited dining at the capitol ground.

Meanwhile, San Jose de Buenavista Mayor Elmer Untaran said during a press conference on Tuesday their municipality will be participating in the various activities of the Binirayan Festival.

“Since the reigning queen of the Binirayan Festival is from our municipality, we will then be giving our best support to the festival,” he said. (PNA)