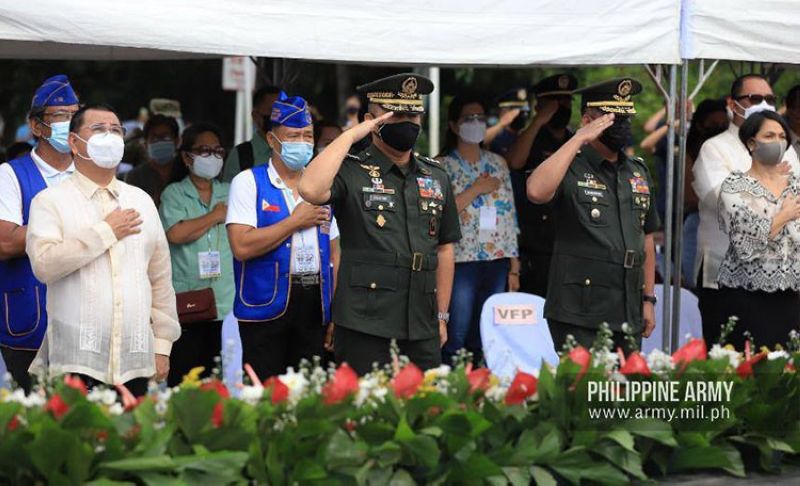 "My profound gratitude and salute to all our World War II heroes -- both uniformed and civilian. Our nation and the rest of the world are forever grateful," said Lieutenant General Andres Centino, Army commanding general, during his commemorative speech at the MacArthur Landing Memorial National Park in Palo, Leyte.

"As we continue to live in modern times, let us continue to strengthen the healing and reconciliation that began after the war. Let us also live and dedicate our lives to peace based on our shared values of liberty and equality," Centino added.

The Army official also recognized the 49 remaining war veterans from Eastern Visayas “for their display of courage and patriotism.”

Centino also honored the Filipino casualties and the fallen soldiers from Allied and Japanese forces during the war.

“Today, we recognize the brave hearts and determined spirit of our forefathers. There are not many left of our World War II Veterans, but their immeasurable contributions will always influence multitude of citizens,” said Brigadier General Rommel Bernardo Cabagnot, director of the Police Regional Office-Eastern Visayas.

“Under the most difficult conditions during the said conflict, our Waray-Waray forefathers fought alongside the American soldiers with nothing much but gallantry and courage. Coupled with unswerving and resolute devotion, they have drawn the Filipino nation into redemption,” he added.

Meanwhile, Cabagnot urged the public to work together against the coronavirus disease (Covid-19), insurgency, and other forms of criminality.

“Just like the Leyte Gulf warfare, we need to combat these formidable crises, hence, it is of necessity that we raise our offensive strategies and get our forces ready,” Cabagnot said in a statement.

The Leyte Gulf Landings on October 20, 1944 fulfilled the promise of US General Douglas MacArthur to return to the Philippines and liberate it from Japanese forces. (SunStar Philippines)