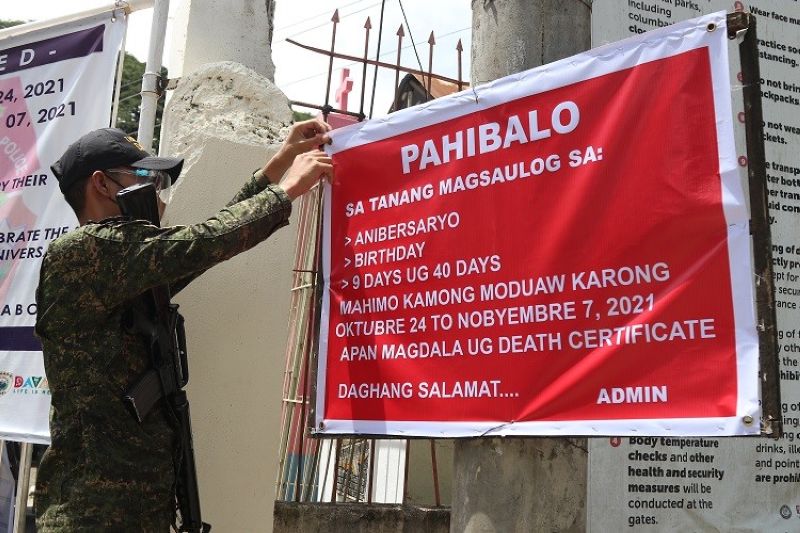 MORE local government units (LGUs) in Davao Region had ordered the closure of some private and all public cemeteries in their respective area in light of the observance of All Saints' Day and All Souls' Day.

Police Regional Office (PRO)-Davao Region Spokesperson Eudisan Gultiano said in a virtual presser on Wednesday, October 20, that they are coordinating with different LGUs after the latter had issued their respective resolutions, ordering the closure of public and private cemeteries to avoid mass gatherings, which are vulnerable to Covid-19 transmission.

As of October 20, Gultiano said the following LGUs that ordered the closure based on the resolution they received include Davao City, three municipalities in Davao de Oro (Nabunturan, Monkayo, and Maco), Island Garden City of Samal in Davao del Norte, and two areas in Davao Oriental (Mati City and Banaybanay).

She added they are still waiting for the resolution from Davao del Sur and Davao Occidental.

Gultiano said while their personnel will be deployed in the cemeteries to monitor and secure the area, they do not have "uniformed measures" since they are dependent on the resolution of the respective LGUs.

"The uniformed measure will only be the implementation of the Covid-19 protocols," she said.

(People, as per experience and observation, usually go to cemeteries during the final day before the start of the closure. That is why there is an influx of visitors. We are going to deploy personnel to patrol and place police assistance desks at cemeteries.)

She also reminded visitors to observe health protocols inside the cemeteries.

The municipality of Sto. Tomas in Davao del Norte, which was not mentioned by Gultiano, also ordered the closure of some private and all public cemeteries from October 30 to November 4.

Sto. Tomas information officer Mart Sambalud said the recommendation was based on the Inter-Agency Task Force on Emerging Infectious Diseases (IATF-EID) resolution ordering the closure of private and public cemeteries on the said dates.

“The public will be allowed to visit their loved ones before October 30 and November 5 onwards,” Sambalud added.

Davao City Mayor Sara Duterte-Carpio, early October this year, had ordered the closure of cemeteries and columbaria for 14 days from October 24 to November 7.

The city, in released guidelines on Tuesday, October 19, said visitors only allowed to go inside the cemeteries in the said period are those with scheduled burial, interments, death anniversaries, 40th day, and visitation due to the birthday of the deceased.