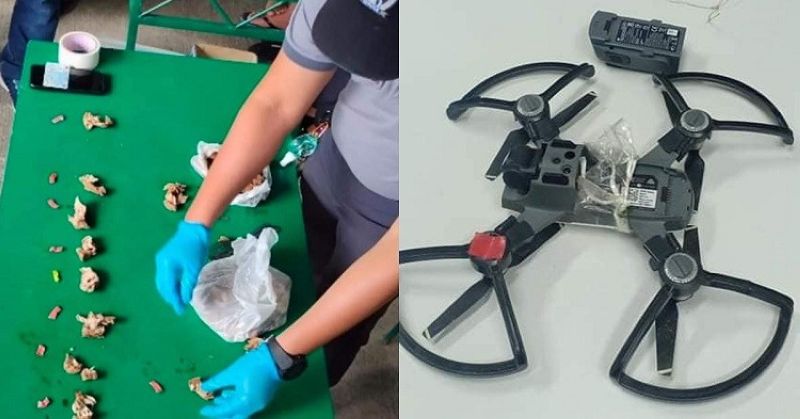 THE Bureau of Jail Management and Penology-Davao Region (BJMP-Davao) thwarted yet another attempt of sneaking illegal drugs inside the Davao City Jail -- this time it was attempted twice.

For the first try, illegal drugs were inserted in food, while for the second attempt, it was carried via drone.

On Monday, October 18, 2021, BJMP reported that a drone with three pieces of heat-sealed transparent plastic sachets of white crystalline substance, suspected as methamphetamine hydrochloride or commonly known as "shabu," was discovered.

The item was reported to the Talomo Police Station 3 by a kagawad in Barangay Maa.

The drone with a camera was found in Purok 25-B, People’s Village, carrying the substance weighing approximately 25 grams that has an estimated street value of P400,000.

The items were discovered during the “Paabot” activity of Davao City Jail-Annex.

A total of 15 sachets, with an estimated street value of P32,000, were discovered upon thorough searching.

Two jail visitors carrying the items are currently detained while awaiting charges to be filed against them.

BJMP-Davao said its personnel will intensify security measures in the area and apprehend individuals trying to sneak any contraband inside the jail facility.

"The BJMP will continue to be vigilant in securing our facilities to assure that all Persons Deprived of Liberty under our care will be detained according to the standards set about by the laws," the agency said.

SunStar Davao reached out to BJMP-Davao Spokesperson Jail Inspector Edo Lobenia through text message, but he has not yet responded as of press time.

The BJMP, in March 2020, imposed a jail lockdown and temporarily suspended the contact visitation in its jails as a precautionary measure against Covid-19.

Only essential items such as medicines and special dietary requirements could be brought to the facility by the families of inmates, and they were all subjected to searching procedures and security protocols.

There were already several attempts of sneaking illegal items through food that were intercepted by the BJMP-Davao staff.

The ordinance aims to address safety and security concerns after the operation of drones worldwide is now subjected to strict regulations as these flying contraptions are capable of carrying explosives that are used in terrorist attacks.