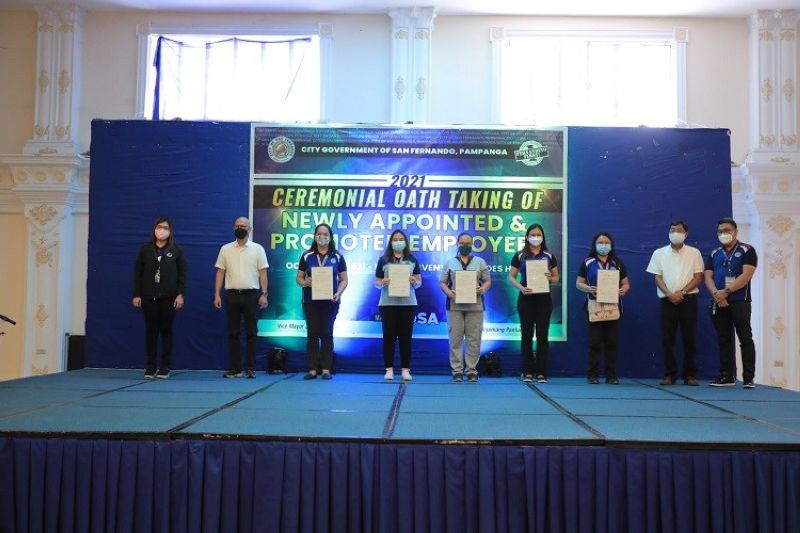 PROMOTED HEALTH PERSONNEL. These employees of the City Government of San Fernando who are under health and medical fields were among the over 90 newly appointed and promoted employees of the City on October 18, 2021. Joining them are Mayor Edwin “Edsa” Santiago, Vice Mayor Jimmy Lazatin, City Health Officer-in-Charge Dr. Carlos Mercado, and City Human Resource Management Officer Dr. Rachelle Yusi. (City of San Fernando Information Office)

MORE than 90 newly appointed and promoted employees of the City Government of San Fernando took oath of office on October 18, 2021, increasing the total number of permanent employees in the local government unit to over 600.

More than half of the total number was achieved in only three years, through the constant implementation of the Partial Reorganizational Structure and Staffing Pattern (PRSSP) of the City, which commenced in 2018.

This paved the way for personnel to be appointed from being “project-based” or “casual” employees, and existing permanent employees to be promoted to higher posts.

Further, City Human Resource Management Office (CHRMO) data showed that more than 150 employees were either appointed or promoted from 2020 to 2021 despite the pandemic.

“Amid the challenges that we are facing, I am really proud and inspired to continue fulfilling the mandate of our office [CHRMO] because of your unwavering passion to serve. This is not just a milestone for employees like you. It is also a milestone to the City Government itself,” said Dr. Rachelle Yusi, CHRM Officer, in her opening message.

The candidates passed through the same procedure and qualification standards except that the screening, panel interviews and deliberations were done virtually to comply with infection control policies.

Mayor Edwin “Edsa” Santiago led the oath-taking of the employees. It was witnessed by Yusi, Vice Mayor Jimmy Lazatin, City Health Officer-in-Charge Dr. Carlos Mercado and other heads of offices.

(Your appointment and promotion are very timely because, in the midst of the pandemic, we need more government representatives who will continue the City’s programs and projects for the Fernandinos, for their benefit.)

As of writing, apart from the 633 permanent employees, the City Government also has 808 project-based, 133 casual, 65 coterminous, and 10 temporary employees, along with 14 elected officials. (PR)