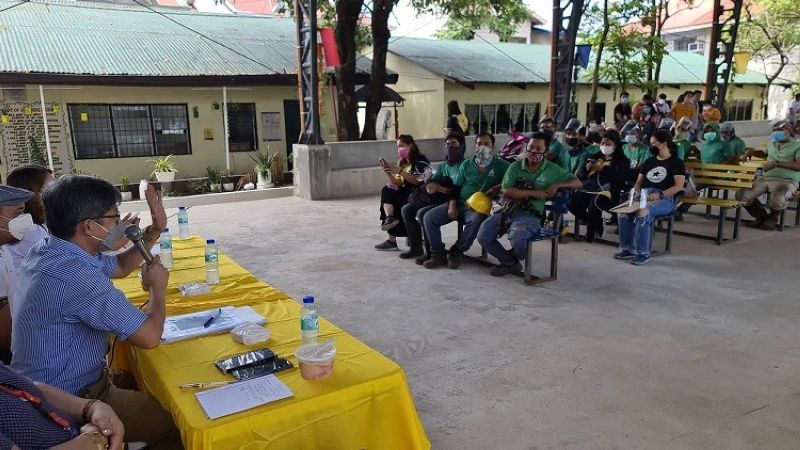 HEARING. Filomeno C. Eufemia Jr., acting election officer and chairman of election registration board in San Simon town listens to the sentiments of the employees of Real Steel Corporation during Wednesday's hearing regarding their transfer of residency. (Chris Navarro)

FACTORY worker Ernest Mago has not been able to exercise his right to vote in the past two elections. Originally from Dipolog City, he moved to San Simon town, Pampanga together with his family in 2014 to seek a livelihood.

(I've been here in San Simon for seven years and since I moved, I haven't been able to vote.)

Mago and his family are now renting a house in Purok 3, Barangay San Isidro and he is working at Real Steel Corporation (RSC), a steel plant along Quezon Road.

(My wife is also a voter here. She is already registered so I thought of registering when the time comes.)

On Wednesday, Mago, along with his coworkers trooped to the local Commission on Elections to transfer their voter's registration to finally practice his right to suffrage in the coming 2022 national and local polls.

However, what was supposedly a simple transaction suddenly became a subject of inquiry with the Chairman of the Election Board of Registration as two residents of Barangay San Isidro opposed the workers' move.

Agnes Cunanan, one of those who opposed, said they are opposing the transfer of voting rights of the workers as they are not legitimate residents of the municipality.

(They are not from here. They just work here. When they find another job somewhere else, they just leave here suddenly.)

Cunanan also blamed the other workers of Real Steel whom she said also registered for voting in 2019 as the reason why she lost her bid for public office during the local polls that year.

For her part, RSC Human Resources Officer Jennelyn Salazar, who assisted their workers during the inquiry, asserted that it is the right of their workers to vote and the opposition's move to halt this is a suppression of their rights as Filipinos.

(Let's just say that they are not native here but as long as they have lived here, they have the right to vote and also receive your assistance meant for them as residents of San Simon.)

(Most of our workers have been with the company for years. Some came from faraway places and especially now that there is a pandemic, it is difficult to return to their places so hopefully, even if they are only here in San Simon, they will still be able to vote because this is not only a local election but also a national one.)

Meanwhile, San Simon Acting Election Officer and Chairman of Election Board of Registration Filomeno Eufenia, Jr. said there are already many instances in other places where workers were allowed to transfer their voter's registration.

He cited the same incident in Apalit town many years ago when then-Mayor Oscar Tetangco Jr. opposed the voters' registration of Ang Dating Daan members, but some were allowed after proving their residence in the town.

(If they are stay-in and it seems like there is a community where they can really live and not just your barracks that are like a resting place, it means that they really live there and they have fulfilled the required length of stay.)

Eufenia added that they were able to visit the workers' barracks and were able to see that it is liveable and has a flea market where they can purchase essential goods.