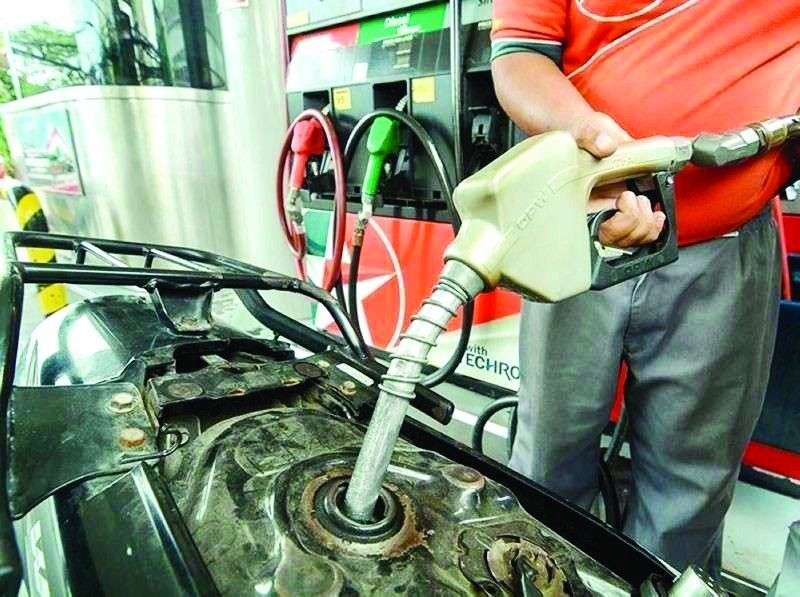 SOARING. Consumer spending may be affected as prices of fuel continue to rise for eight consecutive weeks now. Hikes in fuel prices normally lead to hikes in transport fare and cost of production of goods and services. / SUNSTAR FILE

BUSINESS leaders in Cebu have warned that the continued hike in oil prices for eight consecutive weeks now could dampen consumer spending this last quarter of the year.

“The rising oil prices is certainly inflationary and will dampen spending in the fourth quarter. Let us hope that the US and G8 countries will intervene to soften it,” said Steven Yu, president of the Mandaue Chamber of Commerce and Industry, Thursday, Oct. 21, 2021.

Soaring prices have been recorded 32 times for gasoline, 30 times for kerosene and 33 times for diesel since the beginning of the year, according to the Department of Energy (DOE).

“The government should review options to soften the oil price increase although it is driven by external factors beyond its control,” said Yu.

The fourth quarter of the year, or popularly known as the “Ber months,” is a peak season in business. These months from September to December generally connote an upside in the consumer-driven economy.

Consumer sentiment for the fourth quarter of 2021 improved as the confidence increased to 2.7 percent from the previous survey result of 1.3 percent, according to the Bangko Sentral ng Pilipinas’ latest consumer confidence survey.

“Respondents attributed their optimism to the availability of more jobs, additional and higher income, effective government policies and programs and stable prices of commodities,” the BSP said.

The survey also showed that households’ spending outlook on goods and services for the fourth quarter of 2021 was more upbeat as the confidence index increased to 31.4 percent from the previous survey’s result.

Oil companies in the country implemented another round of oil price hikes Tuesday morning, Oct. 19, raising diesel prices by P1.50 per liter and gasoline prices by P1.80 per liter. They also increased the price of kerosene by P1.30 per liter.

The DOE in a statement said the prolonged oil price spike was due to a continuing rise in world market prices resulting in the sudden global increase in demand and an unanticipated lack of supply.

The demand, which is estimated at 103.22 million barrels a day (as of Oct. 16 versus a supply of 100.32 million barrels/day) is due to the surge in economic activities in countries that have contained the spread of Covid-19 which led to sudden demand in energy utilization, including the demand for oil products in the transportation sector like gasoline and diesel; and stocking of petroleum products’ inventories as winter approaches.

Production, on the other hand, has slowed due to the current global direction of sourcing energy from low-carbon emitting sources.

The Philippines uses the equivalent of 425,000 barrels/day, which is around 0.4 percent of the world supply.

Before the pandemic, the latest recorded total worldwide supply was, more or less, 104 barrels a day. To return to that level of supply, the Organization of Petroleum Exporting Countries (Opec) has committed to increase the production and supply of crude oil by 400,000 barrels/day. The Opec is scheduled to meet on Nov. 4 to discuss and reassess the situation.

The Makabayan bloc has already sought a price freeze on basic goods.

The group filed House Resolution 2310 on Tuesday to address the impact of the soaring oil prices.

“The nonstop oil price hikes are setting off an adverse domino effect on the price of basic goods and services at a time when the majority of Filipino families are suffering from the economic fallout of a prolonged pandemic,” the Makabayan group said in its resolution.

Cebu Chamber of Commerce and Industry president Felix Taguiam said they welcome measures that would help business owners and consumers cope with the increasing fuel prices.

“In these trying times, the government must help implement measures. Though world oil prices are now at their high, a relief would have been good since oil is a prime commodity that fuels the industry and mainstream manufacturing firms. We hope the situation stabilizes soon so we can move forward in the new normal,” said Taguiam.

“A price freeze on select commodity items for a certain limited period is beneficial for the greater majority, especially for micro, small and medium enterprises. It should be subject to regular review,” added Yu.

Ma. Elena Arbon, Department of Trade and Industry 7 director, meanwhile, said the government only freezes prices as a result of a declaration of a state of calamity or emergency.

So far, the government has yet to take any action on curbing the soaring oil prices.

The DOE, on the other hand, is asking Congress to amend the Oil Deregulation Law to provide a framework for the government to intervene and address sudden, prolonged oil price spikes, including the unbundling of the cost of petroleum retail products to determine their true and passed-on costs. (KOC)