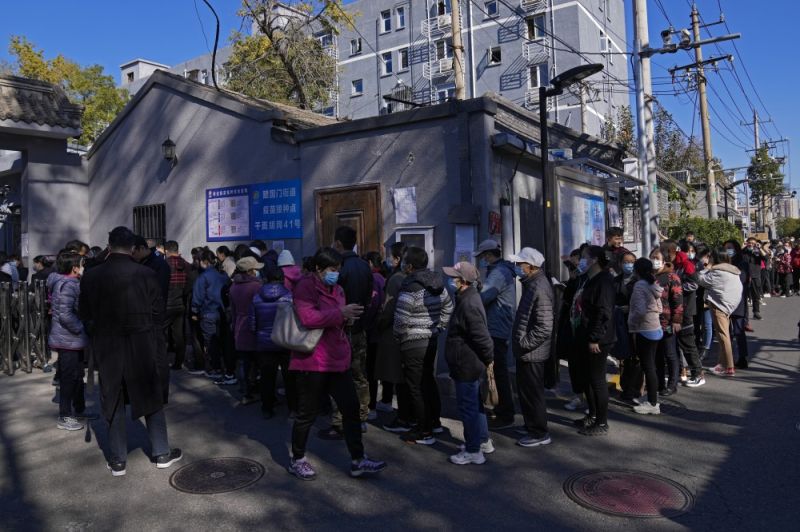 BEIJING. Residents wearing face masks to help curb the spread of the coronavirus line up to receive booster shots against Covid-19 at a vaccination site near a residential area in Beijing, Friday, October 22, 2021. China's capital Beijing has begun offering booster shots against Covid-19, four months before the city and surrounding regions are to host the Winter Olympics. (AP Photo)

CHINA'S capital Beijing has begun offering booster shots against Covid-19, four months before the city and surrounding regions are to host the Winter Olympics.

Anyone 18 or older who have received two-dose Chinese vaccines and belong to at-risk groups, including those participating, organizing or working on games facilities, would be eligible for the additional shot, state media reported Friday, October 22, 2021.

The booster has been rolling out in cities across the vast nation since late September, but Beijing authorities have been extra cautious in who receives the extra jab.

The games are set to begin on February 4, 2021 with only residents of China allowed in the stands. Indoor events with sliding, skiing and jumping will be held in the suburb of Yanqing and the neighboring city of Zhangjiakou.

China has been largely successful in preventing local transmission through strict requirements on mask wearing, quarantining and contact tracing. Cases continue to pop up however, with 28 new ones reported Friday, including one in the Beijing suburb of Fengtai.

The pandemic is believed to have originated in the central Chinese city of Wuhan in late 2019, leading to a total lockdown that affected more than 50 million people.

China has been accused of covering up the initial outbreak and stymying investigations into the coronavirus' origins, although it said earlier this week that it would cooperate with a renewed investigation by the World Health Organization while “firmly opposing any forms of political manipulation.”

The World Health Organization on Wednesday, October 20, 2021, released a proposed list of 25 experts to advise it on next steps in the search for the virus’ origins after its earlier efforts were attacked for going easy on China. (AP)