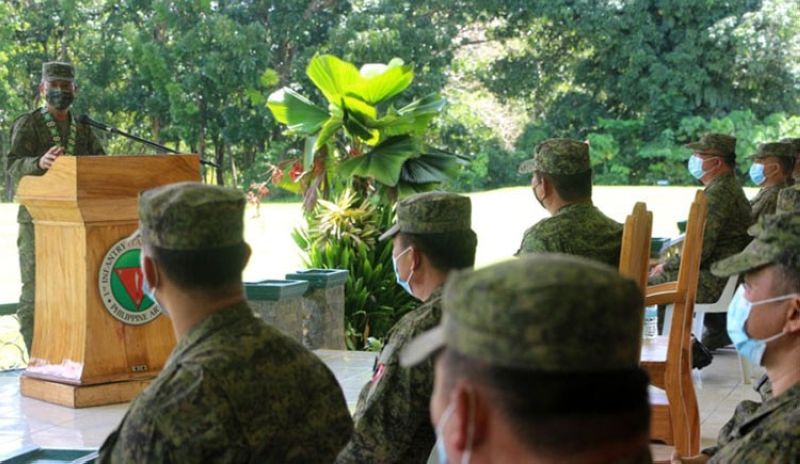 ZAMBOANGA. The inspecting team from the Philippine Army concludes Friday, October 22, the Annual General Inspection at the 1st Infantry Division and its line units. A photo handout shows Brigadier General Roy Galido, Army inspector general (standing), addresses the officers and men of the 1ID upon the arrival of the team at Camp Major Cesar Sang-an, home of the 1ID in Labangan, Zamboanga del Sur. (SunStar Zamboanga)

THE inspecting team from the Philippine Army concluded Friday, October 22, the Annual General Inspection (AGI) at the 1st Infantry Division (ID) and its line units.

The AGI concluded through an exit briefing by the inspecting team to Major General Generoso Ponio, commander of the 1ID.

During his talk, Brigadier General Roy Galido, Army inspector general (IG), commended the 1ID for its laudable performance for 2021.

"The results were impressive," said Galido. "I commend all of you for supporting your commander. The mission of the commander could not be performed well without your support."

Galido also reminded the 1ID troopers to exercise non-commissioned officer (NCO) empowerment, display a high state of discipline within themselves and at work, and keep themselves physically fit, as these can significantly impact the organization.

On October 14, the inspecting team went around the offices of the division staff for the validation of documents and other data.

After which, they administered a survey and dialogue to the officers and enlisted personnel of the 1ID.

It is recalled that the 1ID received a Certificate of Excellence from the Army Inspector General for obtaining the highest overall rating among the 35 Philippine Army major units in last year's AGI. (SunStar Zamboanga)