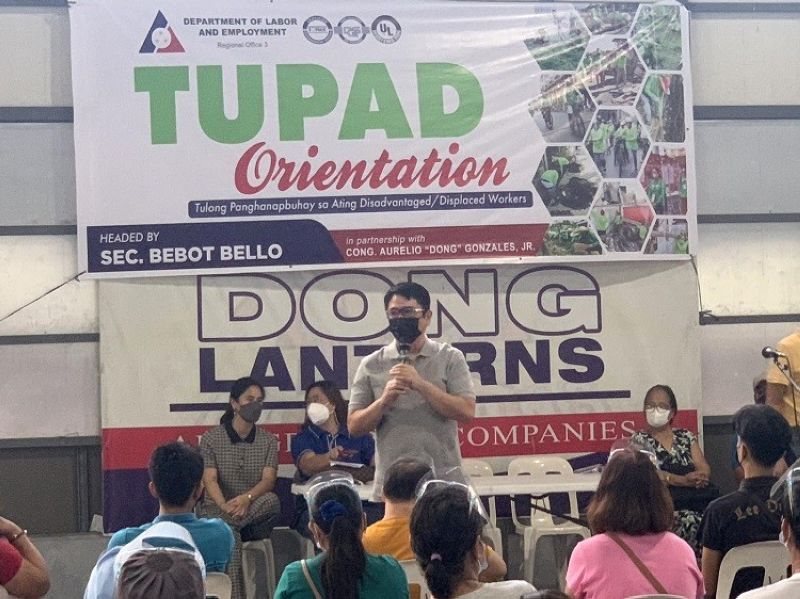 THE office of the Third District Representative Aurelio Gonzales, Jr., in partnership with the Department of Labor and Employment (DOLE), led the orientation of the beneficiaries of the Tulong Panghanapbuhay sa Ating Disadvantaged Workers Program (Tupad) at the former’s district office in Barangay Anao in Mexico town, Pampanga.

The lawmaker was joined by his daughter Mica Gonzales, who is a board member aspirant for the Third District.

The basis for the selection was based on the beneficiaries’ economic background and the town from which they came from.

Tupad is a community-based package of assistance that provides emergency employment for displaced workers, underemployed and unemployed indigents.

Under the program, each beneficiary is hired to work for a minimum of 10 days with a daily pay based on the prevailing minimum wage.

Each will be provided protective clothing and head gear and enrolled for insurance coverage with the Government Service Insurance System covering the entire duration of their work program.

Congressman Gonzales said the program will greatly help his constituents, adding those in marginal sections of the community need all the help they can get. He urged the beneficiaries to take the program seriously and strive to excel in the work given to them.

Tupad is one of the flagship programs under the Dole Integrated Livelihood and Emergency Employment Program (Dileep).

Through the Dileep, self-employed workers with insufficient income, marginalized and landless farmers, unpaid family workers, parents of child laborers, low wage and season workers, and workers displaced or to be displaced by natural or man-made disasters can now easily avail of or access DOLE’s livelihood and emergency employment programs and services.