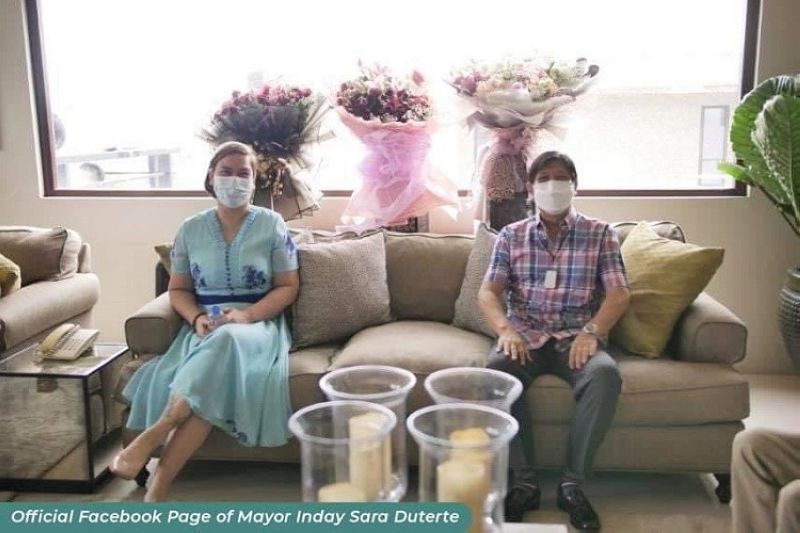 DAVAO City Mayor Sara Duterte-Carpio on Saturday, October 23, 2021, met with presidential aspirant Ferdinand "Bongbong" Marcos Jr. and Senator Imee Marcos in Cebu, sparking rumors that she will take on a national position in the 2022 elections.

In separate Facebook posts, Duterte-Carpio posted photos confirming that she met with the Marcos siblings on Saturday.

(I could confirm that presidential aspirant and former senator BBM and I met during the birthday of Cong. Yedda, wife of House Majority Leader Martin Romualdez in Cebu.)

Duterte-Carpio also posted photos of her meeting with Imee Marcos.

(Manang Imee, how are you? Thank you for visiting and for your constant support.)

(Good morning! Early meeting and catching up with Cebu City Vice Mayor Mike Rama! We also spoke witg Atty. Bruce Rivera. Thank you so much for the support.)

Duterte-Carpio did not disclose what was discussed during her meeting with the Marcoses and Rama.

On Friday, Duterte-Carpio stunned her supporters when photos of her donning a green hoodie with "Sara All 2022" emblazoned on it went viral online.

Sara All Philippines 2022 is one of the groups urging her to run for president in the elections.

(Good evening to all of you. I confirm my visit in Cebu. I am currently speaking with my cousin, Cebu Fifith District Board Member Red Duterte. Thank you.)

The mayor earlier declared that she will not be running for the highest electoral position despite calls from her supporters.

Duterte-Carpio will instead be running as a reelectionist for Davao City mayor. She is under the Hugpong ng Pagbabago partylist.

Duterte-Carpio has kept mum on the possibility that there will be a "switching" in presidential nominations, similar to what happened to her father President Rodrigo Duterte in the 2016 elections.

PDP-Laban, the President's political party, fielded Senator Bato dela Rosa as its standard-bearer in the 2022 elections.

Presidential Spokesperson Harry Roque, however, said on October 8 that Duterte-Carpio will not be a substitute candidate to Dela Rosa. (JGS)