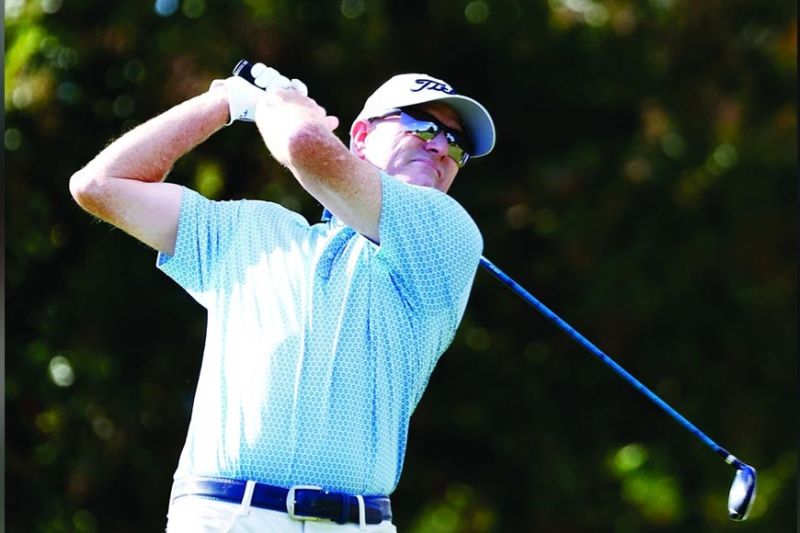 SOLID HIT. Steve Flesch looks on his tee shot at the 10th hole during the second day of the Dominion Energy Charity Classic golf tournament at Country Club of Virginia, USA. / AP Photo

RICHMOND, Va. — Steve Flesch birdied the par-4 18th hole for a 5-under 67 and a two-stroke lead over Bernhard Langer and Steven Alker on Sunday (PH time) in the Dominion Energy Charity Classic, the first of three PGA Tour Champions playoff events.

Flesch reached 13-under 131 with his second straight bogey-free round on The Country Club of Virginia’s James River Course. He has played the back nine in 9 under.

“I did a lot of the same stuff as yesterday,” Flesch said. “I didn’t get off to a quick start, I parred the first five, but then when I got to six, I made a nice birdie and played another great back nine today.”

The 54-year-old Flesch won the 2018 Mitsubishi Electric Classic for his lone senior title. He won four times on the PGA Tour.

Langer, the 64-year-old German star who leads the Charles Schwab Cup points standings, also had a 67. He won the Richmond event in 2017.

Alker, the 50-year-old New Zealander who had a one-stroke lead over Flesch after an opening 63, dropped back with a 70.

“I didn’t quite obviously putt as well,” Alker said. “Sixty-three, you’ve got to putt well, so it wasn’t quite there, but I didn’t give myself as many chances. Wedges weren’t as close. Kind of struggled on the back nine a little bit.”

Defending champion Phil Mickelson closed with quadruple-bogey 9 on the par-5 ninth for a 74. He was tied for 49th at 1 over.

Mickelson won the Constellation Furyk and Friends two weeks ago in Florida for his third senior victory in four career starts. (AP)